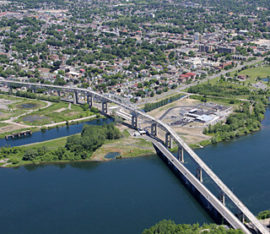 
Cornwall, Ontario – Grab a unique perspective of Cornwall and become part of the City’s heritage at the same time by taking a walk on Cornwall’s historic and iconic bridge.

On Tuesday, July 8th, from 2:00- 8:00 pm, people will have one last chance to make the 1.6 km hike from Cornwall to Cornwall Island. Don’t forget to bring your camera! With a clearance of 36.5m above the old canal to accommodate tall ships, the view of the city and the new completed bridge will be picturesque.

The Seaway International Bridge Corp. and the Federal Bridge Corp. have collaborated to open the bridge one last time for pedestrians. The bridge is scheduled for demolition this summer as it has been replaced with a new low-level bridge.

7,300 tons of concrete was used to construct the deck of the bridge as well as another 34,000 tons to form the piers.  In addition to the concrete, 5,700 tons of steel and hundreds of thousands rivets and bolts were used to fabricate the structure of the bridge.

32,000 gallons of paint were used in order to protect the bridge against rain, salt, ice and snow. There was enough paint used to completely cover 266 football fields.

The Seaway International Bridge Corp. and the Federal Bridge Corp. Ltd. have made arrangements for anyone who uses mobility aids. The rain date for the event is scheduled for July 9th from 2:00-8:00 pm.

Be sure not to miss the final chance at walking Cornwall’s iconic bridge.