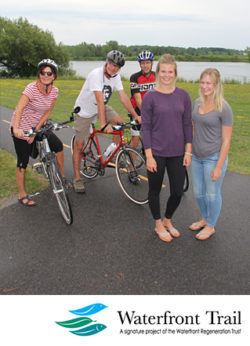 
Cornwall Ontario – The Great Lakes Waterfront Trail has been recognized as offering the very best that Ontario trails have to offer.

Designated one of the five ‘Trails of Distinction’, the Trail protects, connects, and celebrates the world’s largest group of freshwater lakes, as well as the St. Lawrence River. The 2100km trail serves as a catalyst for the regeneration of Lake Ontario, and is a much-loved and well-used fitness, recreation and tourism attraction.

“Cornwall is pleased to be an integral part of the Waterfront Trail,” says John St. Marseille, General Manager of Infrastructure and Municipal Works with the City of Cornwall. “Cornwall’s portion of the trail is all off-road – allowing users a safe corridor to enjoy some amazing scenery along the St. Lawrence River. It is very popular with cycling and running enthusiasts.”

Cornwall’s Waterfront Trail is a dedicated off-road multi-use trail that spans the entire city’s waterfront, offering stunning views of the Cornwall Canal and the St. Lawrence River and connecting to a number of attractions.

As you approach Cornwall, the Trail runs through Guindon Park before turning south at Powerdam Road. Take a moment to visit the St. Lawrence Power Development Visitor Centre and snap a photo of the impressive RH Saunders Power Dam. Continue east along the remains of the historic Cornwall Canal and travel underneath the brand new bridge that connects Cornwall to Cornwall Island. Next up is beautiful Lamoureux Park, home to the Cornwall Civic Complex, Cornwall Curling Centre, Cornwall Aquatic Centre, Cornwall Community Museum, and the Cornwall Sports Hall of Fame. This is a great opportunity to grab a bite to eat in any of the fabulous restaurants along Pitt Street or fill up your water bottle at water filling stations along the route. The Trail continues along Marina 200, Cornwall Harbour and through the Historic Cotton Mill District.

East of Cornwall, a short detour will take you to Gray’s Creek Conservation Area where you’ll find 5km of meandering trails through natural landscape. The Waterfront Trail continues through South Glengarry until the Quebec Border.

West of Cornwall, the Waterfront Trail follows the Long Sault Parkway, which travels through a series of 11 islands that were created from high points of land left after the flooding of the St. Lawrence River during the construction of the Seaway in the 1950s. In fact, several villages once stood where the river now lies, a fascinating story captured at the Lost Villages Museum.

You can download a map of the Waterfront Trail here:

“As we mark the 150th anniversary of confederation, Ontario is proud to recognize the Great Lakes Waterfront Trail as a Trail of Distinction,” said Eleanor McMahon, Minister of Tourism, Culture and Sport. “The Ontario Trails of Distinction program showcases and celebrates our province’s most distinct trails. With its unique wetlands, forests and beaches that connect to vibrant communities across Ontario, the Great Lakes Waterfront Trail is an incredible route of discovery through Ontario’s rich natural heritage‎.”

About the Great Lakes Waterfront Trail

The Great Lakes Waterfront Trail was inaugurated in 1995 with 275 km of trails along Lake Ontario from Hamilton to Trenton. Since then, the Trail has gone through six major expansions to reach its current length of 2100 km.

The Great Lakes Waterfront Trail reflects the Waterfront Regeneration Trust’s commitment to connect people to their Great Lakes and St. Lawrence River waterfront, and engage them in making the waterfront a healthy and vibrant place to live, work, and visit.  Its pathways, neighbourhood streets, and rural roads connect more than 114 communities and First Nations from the eastern border of Ontario to Lake Huron, including quiet countryside, forests, rocky shores, beaches, small towns and urban cities.

“The Great Lakes Waterfront Trail is the culmination of 25 years of investment and co-operation among communities and First Nations, conservation authorities and many other partners,” said Marlaine Koehler, Executive Director of the Waterfront Regeneration Trust. “The Great Lakes Waterfront Trail and the other Trails of Distinction are legacy routes that celebrate Ontario’s iconic landscapes and passion for the outdoors.”