Cornwall Ontario – Cornwall Economic Development will be exhibiting at Canada’s largest commercial retail real estate event this fall. In fact, this year is the fifth consecutive year that Cornwall will have a presence at the annual Canadian Convention of the International Council of Shopping Centers (ICSC). 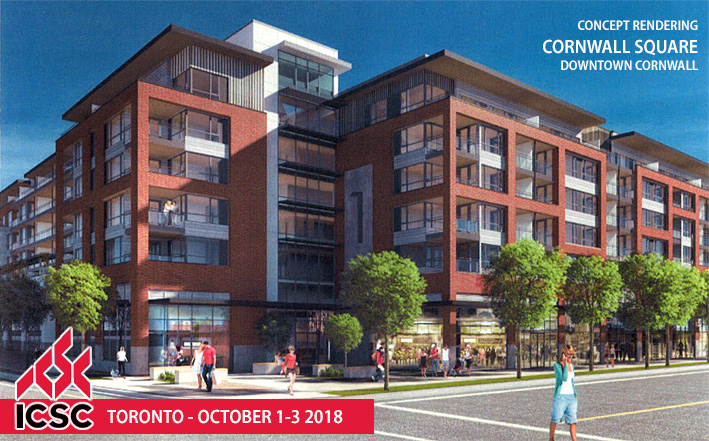 “We are looking to engage retailers in taking a closer look at Cornwall,” said Bob Peters, Division Manager, Economic Development. “The conference attracts North America’s largest retailers, and we feel there are opportunities for certain companies to become more active in our market.”

The ICSC Toronto is being held at the Metro Toronto Convention Centre from October 1-3. The Cornwall booth is number 1024.

Cornwall Economic Development has produced a brochure entitled Commercial Retail in Cornwall, which provides demographic information on Cornwall’s retail trade area, which includes Stormont Dundas and Glengarry. Other information, such as downloadable maps, is available in the Resources section.

Two of the more talked about future developments are the proposed Irving Big Stop Restaurant complex at Brookdale and the 401, and the proposed redevelopment of Cornwall Square to accommodate new residential units overlooking the St. Lawrence River (pictured above). Other developers have been busy, and a number of new retailers/restaurants are currently establishing or have recently established shop in the City. These include: