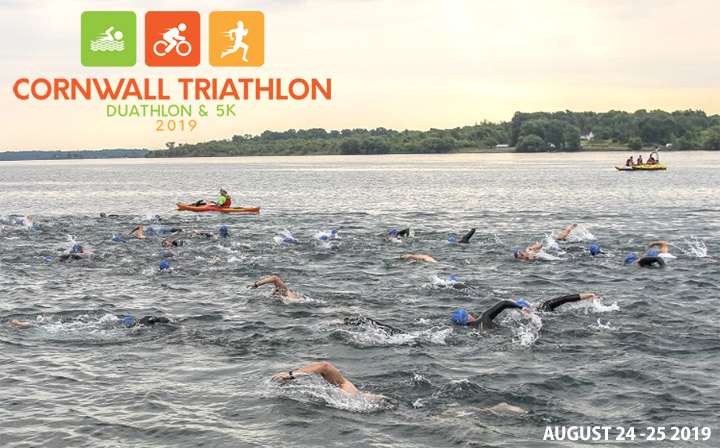 One of eastern Ontario’s premier triathlons, the Cornwall Triathlon is held along the beautiful St. Lawrence River with the assistance of more than 200 volunteers and officials. Over 500 adults and 150 children will take part in the weekend events, with the majority – nearly 80 per cent – coming from outside of the Cornwall area to compete.

“For some, the event is an introduction to the sports of triathlon and duathlon,” said Race Director Rob Allen. F”or others, the races provide the fiercest competition in eastern Ontario, attracting pro and elite athletes from across the continent.”

Triathlon weekend has become a staple of the summer calendar in Cornwall, and interest in the event continues to grow. The Young Champions Day on Saturday will feature 150 youth – a sold-out field – taking part in duathlon and triathlon events at the Cornwall Aquatic Centre. On Sunday, the stage moves to l’Heritage High School and Montreal Road where over 500 adults will take part in a 5K run, duathlon and triathlon events. The competition will take place along closed roads in the cotton mill district and Montreal Road as well as the St. Lawrence River.

According to Mr. Allen, the athlete experience is a big factor in the event’s ongoing success.

“The sole focus of the (organizing) committee is ensuring our volunteers and athletes have a great day,” he added. “Most triathlon events in Ontario are businesses. We don’t operate to turn a profit – customer and volunteer satisfaction is our priority over profit.”

Beyond that, there’s plenty of incentive for the athletes. A total of $3,700 in cash prizes will be paid out to the top finishers in the Olympic and Sprint Duathlon and Triathlon distances.

Residents are welcome to come and cheer on the participants, with Sunday’s adult races beginning between 8:30 am and 10 am from l’Heritage High School on Montreal Road.

“The spectators add a whole other level of excitement to the event and they provide energy to the competitors along the way,” added Mr. Allen.

Featured events on Sunday include:

Sprint Duathlon
This event features a 2.5km run followed by a 20km bike and a 5 km run.

Sprint Triathlon
This event features a 750m swim, a 20km bike and a 5 km run.

About the Cornwall Triathlon

The Cornwall Triathlon offers a unique experience that sets it apart from other triathlons in the area. Partnering with the City of Cornwall the Cornwall Triathlon features traffic free courses in the city core on both event days. Saturday events include a Duathlon of varying distances for ages 14 & under and a Triathlon of varying distances with a pool swim for ages 7-14. The Sunday events include 5km run, Try-A-Tri, Sprint and Olympic Triathlon distances and a Sprint Duathlon.