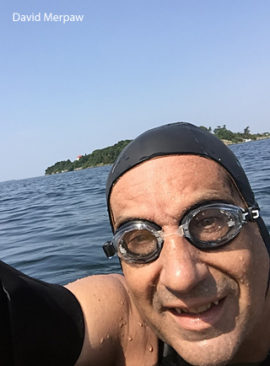 
Cornwall Ontario – A Cornwall athlete is going to follow the path of his voyageur ancestors and attempt something that has never been done before.

Long distance river swimmer and tri-athlete, David Merpaw is attempting a long-distance solo swim of the St. Lawrence River from Kingston to Quebec City. His goal is to promote both an awareness of fresh water and the need for Canadian support of the environmental sciences.

“I would like people to THINK about our water sources, the rivers, lakes, animals, fish, and environment”, says Mr. Merpaw. “Water is life and without it we cannot survive. Swimming as many rivers as I can is a mental and physical challenge, but the real message I wish to promote is the importance of our most significant natural resource – fresh water”.

Mr. Merpaw entered into the river on July 13, and is expected to arrive in Cornwall the afternoon of July 16. Wearing a wetsuit and towing a small kayak with provisions, he intends on swimming between 8 and 14 hours per day. Travelling with the current, the trip is intended to conclude in Quebec City before the end of July.

Known as the Kaniatarowanenneh by the Mohawks, the St. Lawrence or “Great River” is a unique and valuable natural asset that was bestowed upon what is now three nations through the creation of the Great Lakes system some ten thousand years ago. Population growth, urbanisation, industrialization, deforestation, intensive agriculture, pollution and the introduction of invasive species have affected the Great River, and yet it remains one of the most majestic and unique of the world’s major waterways.

In the mid 1980’s, the International Joint Commission identified the St. Lawrence River at Cornwall and Massena as an Area of Concern in the Great Lakes Basin, in great part due to over a century of industrial pollution. In response, a group of local citizens, government representatives, and the Mohawks of Akwesasne joined forces to create the St. Lawrence River Institute of Environmental Sciences – an independent, non-partisan Institute for environmental research and education.

Mr. Merpaw, a river steward and an experienced endurance athlete in his own right, is planning to promote the work of the River Institute because of its role in protecting the health of the upper St. Lawrence River and its citizens.

“The recent incident of the two tug boats sinking near the Cornwall Bridge demolition site really made me think of how fragile our Eco System is,” adds Mr. Merpaw. “The threat of an oil spill in my own backyard really opens my eyes to how important our source of fresh water is. I am born and raised in Cornwall, the River Institute is here, and Cornwall is an important city along this great River. It feels natural to promote the Institute during my River Swims.”

“The scientists (at the River Institute) are doing great work. University students are undertaking special studies, summer high school students are doing research projects, and children are participating in kids Eco camps & workshops. I’m inspired to see all the good work being done there. Cornwall is so fortunate to have a research facility taking on so many aspects of the environmental sciences – it is awesome.”

The St. Lawrence River Institute of Environmental Studies is a non-profit institution and mainly receives its operating funding from donated private funding and grants. Mr. Merpaw is hoping to help promote their important work by raising funds through donations.

“Back in 1993, I thought about swimming the length of the River. I promised myself one day I would attempt it if I could prepare myself and be mentally strong enough,” says Mr. Merpaw. “I have been inspired by other swimmers including Vidmantas Urbonas, a Lithuanian athlete I raced against many times; Slovenian Martin Strel (the greatest marathon river swimmer ever); and American Diana Nyad who swam from Cuba to Key West, Florida. She never gave up and was successful on her third attempt.”

“I feel I am ready at last. Already this year I have swum the Raisin, South Nation, Gananoque, and Richelieu Rivers. It has been two years of training, ten months of planning and preparation. Now, my Dream is about to come true and it will not be a pipe dream.”

You can follow David’ Merpaw’s River Journey by visiting  www.riverinstitute.ca