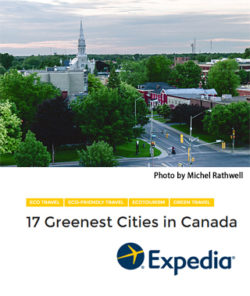 Expedia Names Cornwall as One of the Greenest Cities in Canada


Cornwall Ontario – Cornwall has been included in a list of the 17 Greenest Cities in Canada on Expedia.ca

The article is a part of the Eco-Travel series on Environmentally Conscious Tourism and was written by Jennifer Cuellar, a contributor of over 100 posts on the popular travel portal.

“It’s no secret that Canada is leading the way when it comes to green initiatives,” says Ms. Cuellar.  “With a commitment to natural parks and city recycling programs, you can bet that the rest of the world is looking at the country as an example.”

Cornwall joins Kelowna, Whitehorse and Yellowknife on the list which also includes larger urban centres such as Vancouver and Montreal. See the full article here:

Environmental efforts highlight Cornwall’s entry, which features a photograph of the City taken by Michel Rathwell on Flickr. In particular, Ms. Cuellar notes that the City routinely holds spring clean up walks around the city and that ridership doubled on Cornwall Transit’s Clean Air Day, making it one of the greenest cities in Ontario.

“Cornwall enjoys a beautiful natural setting along the shores of the St. Lawrence River, and people here are very interested in keeping it as green and as clean as possible,” says Mayor Leslie O’Shaughnessy. “It is very nice of Expedia to highlight the efforts of so many in our community.”

Many of those efforts have spearheaded by local volunteer groups supported by City staff. And the efforts are not restricted to land. The St. Lawrence River Institute of Environmental Sciences has been working to help people understand the nature of the river ecosystem through seminars and workshops.

In addition to environmental stewardship, Cornwall is also known for the beauty of its parks. The City maintains over 500 acres of parkland, much of it along the Waterfront Trail which winds its way along the banks of the St. Lawrence River. The natural setting is attracting eco-tourists such as cyclists and geo-cachers as well as new residents.

Cornwall’s efforts in beautification, environmental stewardship and community involvement have previously been recognized with Communities in Bloom awards.

About the City of Cornwall Parks and Environmental Stewardship

More information about the City of Cornwall parks system as well as community environmental stewardship efforts can be found on the City website: