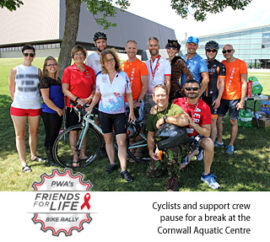 
Cornwall Ontario – Cornwall’s Waterfront Trail was a rainbow of colours as 201 cyclists rode into the city as part of the PWA Friends for Life Bike Rally.

The group was on the 5th stage of a ride that started in Toronto on July 26 and will conclude in Montreal tomorrow afternoon.

“The weather has been hot and sunny and the cyclists are really enjoying the ride,” said Mike Twamley, Director of Philanthropy and Communications for the Toronto People with Aids Foundation (PWA) .

The group left Johnstown this morning and travelled along the Long Sault Parkway before joining the Cornwall portion of the Waterfront Trail, which travels along the St. Lawrence River and is one of the only portions of the Waterfront Trail completely separate from vehicular traffic. The group stopped for a break at the Cornwall Aquatic Centre before continuing east to Lancaster.

“It’s very scenic and nice to travel on,” said Jeffrey Graham, Director of Media and Communications for the Bike Rally.

The Bike Rally is considered the largest AIDS fundraiser in Canada.  In order to ride, all participants are required to raise a minimum of $2500.  This year, over $1,038.000 had been raised, raising the overall total to over $14 million raised for PWA during the 17 years that the Bike Rally has been held.

In addition to riders who identify as being HIV positive, over a third of the participants are LGBTQ, while 30% identified as straight allies. The youngest rider is 17 years old and the oldest is 78. Riders include people from across Ontario, Canada, the USA and Europe.

On average, the riders cycle over 100 km per day over the course of the six days. Cyclists begin training in April, however the group of volunteer organizers work year-round to ensure all of the logistics for the event are in place. Over 100 people support the cyclists as part of the road crew, including staffers from ScotiaBank, who are the presenting sponsor of the ride.

Every July for the past 17 years more than 300 Riders and Crew depart from Toronto on a 6-day, 600 km journey to Montréal for PWA’s Friends For Life Bike Rally. This annual fundraising event has raised more than $14 million dollars and is the sustaining fundraiser for the Toronto People With AIDS Foundation (PWA). The funds raised through the Bike Rally enable PWA to provide critical services and support to individuals living with HIV/AIDS in Toronto.

You can learn more online at www.bikerally.org

About Cornwall’s Recreational Path and the Waterfront Trail

Cornwall’s recreation path forms and integral part of the Waterfront Trail, which is a 740km series of interconnected trails mainly along the shores of Lake Ontario and the St. Lawrence River. The Cornwall portion is 25km in length and offers amazing river views, while connecting people to a number of attractions including Lamoureux Park, Cornwall Civic Complex, Cornwall Curling Centre, Cornwall Aquatic Centre, Cornwall Community Museum, the St. Lawrence Power Development Visitor Centre and the historic Cornwall Canal. It also connects the Gray’s Creek Conservation Area in the east to Guindon Park in the west.