Cornwall Ontario – Morbern has been named as one of Canada’s Best Managed Companies 2020. 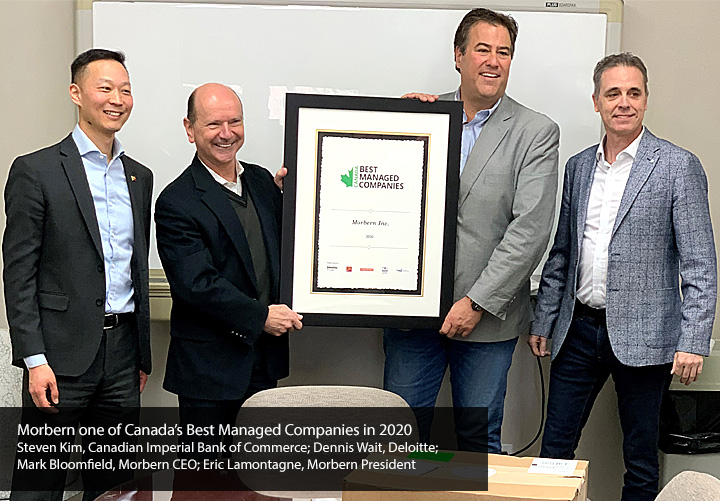 Morbern was one of only 30 companies across the country to receive the designation, and this is the first time the company has been selected.

“It’s an enormous honor to be named as part of this prestigious group,” said Morbern CEO Mark Bloomfield. “To become a successful company requires buy in from every employee as we work toward a common goal, and this award reflects well on each and every member of the Morbern team.”

Morbern was nominated during the summer of 2019 and successfully advanced through two levels of competition to become a finalist last fall. The company was the only new finalist in the Eastern Ontario territory.

The 2020 Best Managed program award winners are among the best-in-class of Canadian owned and managed companies with revenues of more than $25 million, demonstrating investment in talent and technology, innovation in a competitive environment, and an increased focus on global competition. Now in its 27th year, Canada’s Best Managed Companies remains one of the country’s leading business awards programs recognizing Canadian-owned and managed companies for innovative, world-class business practices.

Canada’s Best Managed Companies is run by a group comprising Deloitte, CIBC, Smith School of Business, TMX and Canadian Business Magazine. Each year, hundreds of entrepreneurial companies compete for this designation in a rigorous and independent process that evaluates the caliber of their management abilities and practices.

Morbern joins a field of prestigious winners. The entire list can be found at www.bestmanagedcompanies.ca.

Headquartered in Cornwall, Ontario, with operations in the U.S., China and Canada, Morbern manages manufacturing and distribution centers around the globe.