Cornwall Ontario – Work has begun on the development of a new apartment building in Downtown Cornwall. 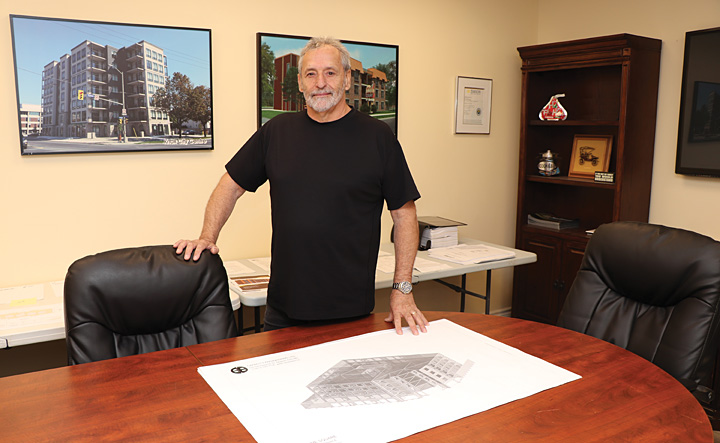 Prime Square is the name of the 5 storey building that will be built by Tri-Star Construction. Once completed the building will house 44 apartments along with one commercial tenant on the ground floor.

“I am excited to get this project underway,” says J.C. Godard, President of Tri-Star Construction. “Prime Square will be an amazing place to live – with restaurants and shopping right next door and the waterfront just a short walk away.”

The property at Pitt and Second has a long history in Cornwall. Originally developed as a private residence in the 1820s, the site housed the King George Hotel and was used at various times as a court house, barracks, ballroom and concert hall before being destroyed by fire in 1997. Subsequent efforts to develop the site stalled, and Mr. Godard purchased the property in February of this year.

The new apartments will meet an identified need for affordable housing in Cornwall. The units will range in size from 418 sf to 790 sf and will eventually rent between $975 and $1,200 per month.

“We have seen increased demand across our other properties and know that Prime Square apartments will be in demand,” says Mr. Godard. “At the same time, we also recognize the need to keep rents affordable and to create a positive living experience for our tenants.”

The project is being supported by the City of Cornwall through its community improvement programs. Brownfield funding was used to help remediate the site in 2008 and most recently City Council approved a tax increment grant to facilitate the development under the Heart of the City Community Improvement Program.

History of the Property

1825 –  In 1825, Dr. Noah Dickinson built a home for his wife who unfortunately died before the house’s completion and therefore was never used as a private residence. From the time of completion until 1833, the intended dream home served as the County Courthouse.

1838 – From 1838 to 1843, the building served as an army barracks giving the building its local name “Old Fort” which it got because of its military connections.

1845 – For the next quarter century, the building performed many functions, serving as a ballroom and concert hall before reverting back to the barracks during the Fenian Uprisings in the 1860’s.

1910 – The building became known as the King George Hotel with the ascension of King George V in 1910. Over the years, the bar was known as “The Old Fort Tavern”, as well as the “Tropicana Bar” and the “4C’s Lounge.”

1947 – The hotel underwent many renovations and alterations to include Liggetts Drug Store and Millar’s Men’s Wear. Eventually, Tamblyn’s would replace Liggetts.

1997 – The King George Hotel was home to many retail stores and was an iconic part of Cornwall’s historic “Four Corners” before it was destroyed by fire on Valentine’s Day 1997.

2006 – In 2006, a local entrepreneur purchased the historical vacant site announcing a glass-fronted office building. In 2015, a revised design was announced for large-scale condos with ground floor commercial space. Due to lack of occupancy, the project was never completed.

2021 – Prime Square is the name of the 5 storey building that will be built on the site by Tri-Star Construction. Construction is expected to being on the site this Fall with project completion by the end of 2022.

Tri-Star Construction is a Cornwall-based developer that has over 50 years of design, development and construction experience. The company recently completed a major expansion of the Riverdale Terrace Retirement Home, and is currently building the Sunset Court apartment building. Other major multi-unit residential projects include Kings Landing on Montreal Road and the Knox City Centre – just one block from Prime Square. More information is available by calling Mary Jane Alexander at 613-363-3823.