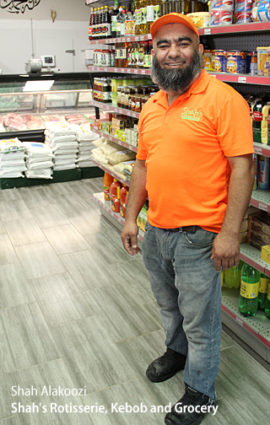 
Cornwall Ontario – Looking for something different?

Shah’s Rotisserie, Kebob and Grocery offers a unique eating experience and it is one that is quickly earning a strong local fan base.

The new business is conveniently located in a 3,000 sf building at 18 Third Street East, and offers room for 30 people to dine inside, with dedicated parking spots on site. And like the name says, there is a little something for everyone, including restaurant dining, takeout meals and groceries.

“Cornwall is diversifying in many ways – not only the people itself, but the openness to explore new flavours,” says owner and chef Shah Alakoozi. “Growing up in Canada, with roots from Afghanistan, and with friends from all around the world I infused my experience into my passion for good food and flavours.”

Shah’s is named after its owner, but the name was also chosen as it means ‘king”. Mr. Alazooli has been cooking for over 20 years, and he believes he offers a royal lineup of kebobs, pizza, wings and more.

“I make a pretty mean kebob,” says Mr. Alakoozi with a smile.

While Shah’s has received a lot of attention for its eat-in/take-out restaurant, it is also an ethnic grocery store and halal butcher shop. Mainstream grocery stores do carry some products, but the selection is often limited. People in Cornwall would have to make special trips to Montreal or Toronto to stock up on speciality rices, spices and certain brand name products. With respect to halal meat, it’s not only that it’s halal but quality and cut matter as well.

Cornwall’s Muslim population continues to grow, very much in harmony with other cultures.

“I embrace the community for their constant open-mindedness and warmth,” says Mr. Alakoozi. Cornwall is a wonderful city to be in, not only is it beautiful but the people are full of kindness. People have been very patient with us, and it’s really nice to see the love the community at large has shown us.”

Having been open for several weeks, Mr. Alakoozi and his small staff feel that the worst of the growing pains are over and are planning a grand opening celebration soon. A delivery service is planned for sometime in the future. Until then, the staff at Shah’s are happy to welcome the public.

“Food is the best way to bring people together!”