Cornwall Ontario – Brad Jacobs and Jamie Sinclair will be back to defend their title at the 2018 AMJ Campbell Shorty Jenkins Curling Classic. 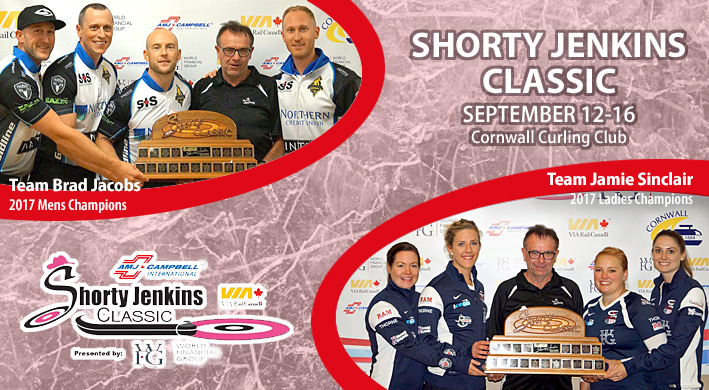 And both Men’s and Ladies’ Champions will have their work cut out for them as this year’s event features a star-studded field of some of the world’s very best curlers.

“We have the largest field ever with 24 Men’s teams and 18 Ladies’ teams,” says John Dilabio, Co-Chair of the event. “The strength of this field is a testament to how popular this tournament is amongst players.”

Brad Jacobs picked up his third Shorty Jenkins win last year, and will have to defend against multiple Shorty winners Glenn Howard and John Epping, the latter of which includes Cornwall’s own Mat Camm as the third on his rink. Also joining the mens side is John Schuster, who led team USA to gold at the 2018 Winter Olympics.

North American teams will face a variety of international teams from Austria, Switzerland, Scotland, Russia, The Netherlands and three teams from China.

The Women’s side is just as competitive as American Jamie Sinclair will have to defend her title against 17 other teams from Canada, Switzerland, Sweden, Japan and the United States. Sinclair is the reigning USA National Champion. She was born in Alaska but grew up in Manotick, just northwest of Cornwall.

“Matches begin at 8am on Thursday and run right through to late Sunday afternoon,” says John Rattray, President of the Cornwall Curling Club. “It is a great sport to watch, the skill level is world-class and the players are very approachable.”

Day and weekend passes are available at the Cornwall Curling Club in limited quantities.

CogecoTV will be broadcasting 4 games and all games from sheet 5 will be available via live streaming.

“Fans from around the world will be able to follow their favourite team via live streaming as well as the bonspiel website,” added Mr. Dilabio.