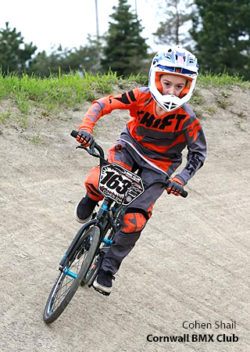 
Cornwall Ontario – Cornwall’s newest high-flying sports amenity and attraction is on track to open this summer.

The new Cornwall BMX Track at Guindon Park is gearing up for an official opening on June 11th and the anticipation is building. The W-shaped dirt track features a variety of bumps, hills and jumps and the work began late last year.

“We’re really excited to get going,” said Cornwall BMX Club President Dan Drouin. “We’ve had a lot of great support from the community and the City of Cornwall.”

The Cornwall track will join a growing list of BMX venues in Ottawa, Kingston, Gananoque, Renfrew and elsewhere in the province.

“It’s one of the fastest growing sports in Ontario,” added Mr. Drouin.

In addition to serving a growing membership locally, the Cornwall BMX Track will also attract visitors to Cornwall. It will form part of the provincial BMX series, Mr. Drouin said, and there are plans to host a provincial qualifier event this summer that could attract upwards of 200 families to Cornwall.

“We expect people from other communities to come to town to use the facility,” Mr. Drouin added. “All of the tracks are coordinated together in the series.”

The land for the BMX Track was leased by the City of Cornwall to the BMX Club, which is handling the maintenance and operations. The burgeoning club has 15 members at present and Mr. Drouin expects that number to grow once the track opens and the sport gains more visibility in the community. BMX enthusiasts can either pay a full membership or opt to pay $10 per race.

When BMX events aren’t underway, the track will be open to the public.

Mr. Drouin said there has been a tremendous amount of community support via the City of Cornwall, a $10,000 donation from the Rotary Club of Cornwall and other sponsors.

“We are always looking for sponsors and volunteers to help with the track,” he added.

The Cornwall BMX Club is a small but growing group of people who race BMX bikes at sanctioned BMX Canada and UCI racing tracks throughout Ontario and Quebec. The Club is comprised of beginners and experienced riders of varying ages (2 to 38 years old) who love the exercise, experience and thrill provided by the sport.

In 2017, work began on the construction of a BMX track in the Guindon Park.

You can find out more about the Cornwall BMX Club by visiting the club’s Facebook page.

BMX is an abbreviation for bicycle motocross or bike motocross, and is a cycle sport performed on BMX bikes, either in competitive BMX racing or freestyle BMX. BMX began when young cyclists appropriated motocross tracks for fun, racing and stunts, eventually evolving specialized BMX bikes and competitions. In 2008, BMX became an Olympic sport with the first medals handed out at the Olympic Games in Beijing.

BMX racing is an inexpensive summer sport that provides fun and entertainment for the whole family.