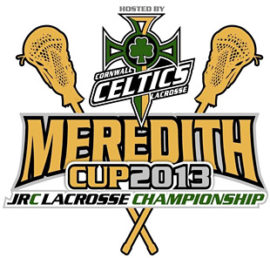 
Cornwall Ontario – The Cornwall Celtics are hoping the third time’s the charm as they compete for the Meredith Cup this weekend on their home turf at the Benson Centre.

The Celtics will do battle against teams from Clarington, Hamilton and Halton Hills as the final four vying for the Ontario Junior C lacrosse championship.

After falling short at the provincials the past two seasons, the Celtics are hoping for a different outcome this year, and they’ll have a chance to do it in front of a hometown crowd.

“This is as big a tournament as we can be in,” said Celtics head coach Shawn Lauzon.

The Meredith Cup kicks off on Friday at the Benson Centre with a round-robin format that will see the top two teams advance to a final, winner-take-all game on Sunday afternoon.

For their part, the Celtics aren’t simply playing the part of host team at the tournament. The Celtics secured their third straight trip to the provincials after sweeping the Clarington Shamrox in the Ontario Junior C Lacrosse League’s East Division Final earlier this month. That marked the team’s third straight East Division title and increased the team’s overall record to an impressive 60 wins and 6 losses over the past three years.

After losing several senior players, many felt it would be a rebuilding year for the team, however the Celtics displayed a solid work ethic and continued its winning ways.

“It’s the strongest team we’ve had in the (past) three years,” said coach Lauzon. “There’s no quit in this team, that’s for sure.”

As for this year’s final four, some observers feel that any one of the four teams could end up winning the championship.

The 2013 Meredith Cup is the latest in a series of high-profile sporting events that have taken place at the Benson Centre, which features three NHL sized ice rinks, an indoor field house and an indoor tennis court.

“The Benson Centre was one of the determining factors in getting (the provincials),” said coach Lauzon. “It’s a great selling feature for any tournament.”

“We are thrilled to be hosting a provincial tournament in our community,” said Mayor Bob Kilger. “Cornwall has a rich lacrosse tradition, and hosting the 2013 Meredith Cup will certainly build on that tradition.”

Admission to the Meredith Cup is $10 per game ($7 for children and students), or if you prefer to take in all of the action, a weekend pass is available for $30.

For those who have never been to a lacrosse game – or haven’t been to one in a while – you can expect to enjoy a healthy mix of speed, skill and physical play.