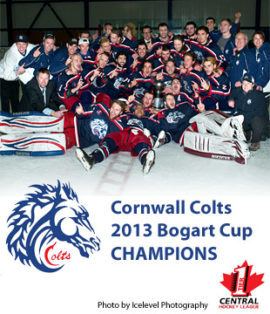 The Colts claimed their fifth league championship on Wednesday night with a thrilling 3-2 overtime victory against the defending champion Nepean Raiders to win the best of 7 final series in 6 games.

Several hundred Cornwall hockey fans made the trip to Nepean for the game, and they had plenty of reason to cheer after Colts captain Stephen Johnson tapped in a goal late in the extra frame to claim the victory.

Cheers immediately filled the air as the Colts players hopped over the boards to celebrate the win and collect the Bogart Cup.

It marked the third consecutive year that the Colts had reached the CCHL Finals, having fallen just short in the previous two seasons.

“We’ve been working for this for three years,” said fan favourite and veteran Colts forward Billy Ulrick, who notched a key goal in the third period on Wednesday night to tie the game and send it to overtime.

Ulrick was one of the first Colts players to hoist the cup after Johnson collected it from CCHL President Kevin Abrams, and he was all smiles as he celebrated with his teammates and posed for pictures with friends and fans after the game.

“This is a great team and I love this City,” he said.

The exciting overtime win marked the perfect finish to an amazing post-season run for the Colts, who entered the playoffs as the third seed after posting a 36-17-5-4 record in the regular season, good for 81 points. They managed to win a pair of hard-fought series with Brockville and Carleton Place before meeting Nepean in the finals.

There were many memorable moments along the way, including a last second goal by Mitch Zion that turned the tide against the Brockville Braves in the first round and several standout goaltending performances by Jordan Piccolino, who was named the playoff MVP for his efforts. Flashy forward Michael Pontarelli scored a number of highlight reel goals against Carleton Place and Nepean and he lead the way among playoff scorers with 15 goals and 25 points.

“The Colts have added another great chapter to Cornwall’s rich hockey history,” said Mayor Bob Kilger, who was following the team’s playoff run closely. “The Colts earned this through hard work and dedication and the entire community is proud of them. They are great ambassadors for our City.”

This year’s edition of the Colts is certainly a unique one – the roster is all-Canadian, made up primarily of Ontario and Quebec players. There’s also a significant local contingent of players on the team, including forwards Kevin Hope, Alex Gendron, Andrew Ming, Tanner Spink, Lawson MacDonald, defencemen Josh Crane, Parker Krol, Ross Craig and back up goaltender James Edwardson.

Mayor Bob Kilger and Cornwall City Council will be hosting a reception on Sunday afternoon to celebrate the Cornwall Colts’ recent Central Canada Hockey League championship and to wish the team well before they head out east to compete in the 2013 Fred Page Cup.

Residents are invited to attend the celebration on Sunday from 2:30 pm to 4 pm in the lower level Salons of the Cornwall Civic Complex. Fans are also welcome to come early and watch the Colts practice at the Civic Complex from 1 pm to 2 pm.

“The Colts won the Bogart Cup in Nepean on Wednesday night, so this celebration will give our residents a chance to celebrate the victory with the team in our hometown rink,” said Mayor Bob Kilger. “The Colts have added another great chapter to Cornwall’s rich hockey history, and they are great ambassadors for our City.”

Fans in attendance at the reception will have an opportunity to meet the players and get autographs, see the Bogart Cup, get a souvenir photo and sign a banner that the team will take with them to Truro, Nova Scotia, where they will compete in the Fred Page Cup, the Eastern Canadian Junior A hockey championship.

“We have the best fans in the league and the support of the community this year has been great,” said Colts Head Coach Ian MacInnis. “The players are looking forward to the celebration on Sunday, and it will provide us with some motivation before we head out east.”

Fred Page Cup Up Next

As winners of the CCHL, the Colts will now prepare to travel to Truro, Nova Scotia to compete in the 2013 Fred Page Cup. The tournament will crown an eastern regional champion who will then go on to compete in the RBC Cup national Junior A hockey championship in Summerside, PEI, from May 11-19.

Cornwall will be joined at the Fred Page Cup by the Junior A hockey teams from Truro, Longueil and Summerside. The teams will battle it out from May 1-5.

The latest championship for the Colts marks the team’s first title in 12 years, however that statistic doesn’t tell the whole story. In the team’s 21-year history in Cornwall, they have compiled a successful track record that many junior hockey teams would be envious of – five league titles, a Fred Page Cup championship in 2000 and two appearances in the RBC Cup. In 21 seasons of play, the Colts have only missed the playoffs once.

In the process, the team has helped over 100 players move on to higher levels of hockey, from NCAA Division I and minor professional leagues in the U.S. to Europe and even the NHL. Some notable former players include Chad Kilger, Jesse Winchester, Cam Barker, Yann Danis, Eric Meloche, Kent McDonell, Hugo Boisvert and Jeff Legue.