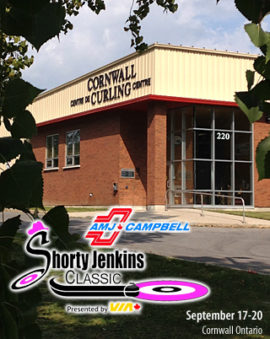 
Cornwall Ontario – Some of the world’s best curlers are coming to Cornwall for the Shorty Jenkins Classic Bonspiel.

The popular bonspiel is part of the World Curling Tour, and has long attracted top Canadian and International curlers over its two decades. The event will take place at the Cornwall Curling Centre from September 17 thru September 20.

“This is a major sporting event that is followed closely by curling fans around the world,” says John DiLabio of the Cornwall Curling Centre. “We are excited to showcase Cornwall to this elite group of athletes.”

The fields will consist of 24 mens and 12 ladies teams and will feature Olympic Gold medalist skip Brad Jacobs and his team along with teams skipped by Glenn Howard and Brad Gushue. Top international women teams from Scotland, the USA and Korea will go head to head against top Canadian curlers such as Sherry Middaugh.

One of the sport’s up and coming stars, Mathew Camm from Cornwall, will also be participating in the event, on John Epping’s team.

“These curlers are all at the top of their game and the Classic will give local aspiring curlers a chance to see the very best in action,” says Kevin Baker of the Cornwall Curling Centre.

The bonspiel is held in honour of, Shorty Jenkins.  Shorty Jenkins is widely regarded as one of the most innovative and influential icemakers in the sport of curling, and was in charge of the ice at major tournaments throughout Canada until his passing in 2013.

“Cornwall has a strong track record of hosting major sporting events, and its great to see another event taking place along our waterfront,” says Mayor Leslie O’Shaughnessy.

The bonspiel was previously held in Brockville since its inception; however a problem with the compressor at the Brockville facility had organizers scrambling for a new home.

“The Cornwall Curling Centre welcomed us with open arms, and we’re very excited to be holding the bonspiel with such great local support,” said Gord McCrady, Bonspeil Chair.

The Shorty Jenkins Classic Bonspiel is sponsored by AMJ Campbell and presented by VIA Rail. It is one of the first curling tournaments of the World Curling Tour season. The total purse for the event is $65,000.

A pass to the four day event is priced at $25 and are available in limited quantities from the Cornwall Curling Centre. The event is expected to sell out quickly.