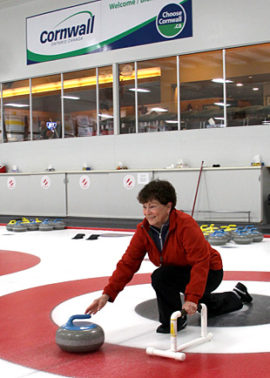 
Cornwall Ontario – The Cornwall Curling Centre will play host to 20 curling teams from across Ontario who will be competing for a provincial title at the Travelers Curling Club Championship.

The Travelers Curling Club Championship is an annual event for men’s and women’s curling teams who have won their respective local club championships. The winning teams from the event compete at the national level against a provincial/territorial champion from all 10 provinces and 3 territories, plus a separate entry for Northern Ontario.

This year’s field of competitors features teams from all over the province, including London, Woodstock, Kitchener-Waterloo, Port Perry, the Toronto area, Ottawa and elsewhere. Cornwall’s teams fell just short at this year’s sectional playdowns and missed out on qualifying for the event, however local curling fans will still have plenty of reason to cheer. With a ticket to the nationals on the line, the quality of curling on display is sure to impress.

“It’s a great event to host. The winners get to represent Ontario at the nationals, and the tournament features a lot of up and comers (in the curling world),” said Kevin Baker, Chair of the event organizing committee.

The action kicks off on Friday, October 31 and continues on Saturday, November 1, with the finals being played on Sunday, November 2. The draws will begin at 9 am, 1 pm, 5 pm and 9 pm on Friday and 9 am, 1 pm and 5 pm on Saturday. Seating is available – free of charge – for residents who want to take in some of the action, while TV Cogeco plans to film the men’s and women’s finals on Sunday for future broadcast.

Upwards of 50 volunteers will be helping with various aspects of the event, which could serve as a stepping stone for Cornwall to host other curling events down the road.

“We want to showcase our facility to the teams across Ontario. Officials from the Ontario Curling Association will also be on hand,” said Mr. Baker.

Travelers is the title sponsor of this event for the sixth consecutive season and the overall responsibility for the championship falls to the Ontario Curling Association, an Association of clubs formed in 1875 that boasts a membership of 193 curling clubs.

Each club in the province declares a men’s and women’s team of 4 players that have played together regularly in a sanctioned club league.  The respective club champions then compete in 8 sectional competitions across the province with the winners advancing to Cornwall.

Cornwall has a rich tradition of competing at the Travelers Provincial Championships.  Four years ago, our first foray into the competition saw Micheline Baker’s team reach the provincials in Milton.  The following year we had both a men’s and a Ladies teams at the provincial event.

Jennifer Harvey and Kevin Baker competed at the St. George’s Club in Toronto with the Baker rink making it to the Semi-finals.  Last year, Jennifer Harvey’s team, competing at the provincials for a second time reached the semi-finals in Hamilton.

This year, the Mayflower Curling Club in Halifax will host the Canadian Championship from November 24-29. The 6th annual championship is sure to be a memorable event as it takes place in Nova Scotia for the first time.