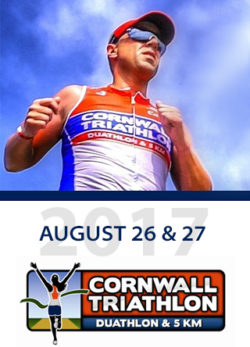 
Cornwall, Ontario – Over 600 athletes are expected to don their cap & goggles, grease their bike chains and lace up their running shoes this August 26th and 27th to participate in the Cornwall Triathlon, one of the largest sporting events in the region.

The Triathlon has grown to become a highly-competitive event attracting athletes from across Canada and the United States, and this year is no exception. The list of participants also includes some world class athletes – including Amy Farrell who was the women’s overall winner at Ironman Lake Placid in July, and Jordan Monnink will be returning as a Pro, both were last year’s winners of our Olympic distance.

That increased reach is bringing additional economic spin-offs with it. “We have had a lot more requests (from participants) about staying the weekend, “said Race Director Rob Allen. “Some people are deciding to bring the kids and do the kids’ event on Saturday and do the adult event the following day.”

The continued growth of the event is due in large part to the athletes themselves. “The biggest thing is word of mouth,” said Mr. Allen. “It’s starting to grow its name further and further.”

The Cornwall Triathlon offers a unique experience that sets it apart from other triathlons in the area by offering traffic free courses along the scenic St. Lawrence River. With almost $3,700 in prizes, the Cornwall Triathlon is one of the biggest prize races in Ontario outside of those organized by the World Triathlon Corporation. “The Triathlon presents an athletic challenge to athletes of all levels,” says Rob Allen, Race Director. “At the end of the race, athletes and fans alike can applaud the effort and accomplishment.” The sport of triathlon features the sports of swimming, cycling and running, yet Cornwall Triathlon organizers also offer a Duathlon (running and cycling) and a 5km run.

While there may be some competitive classes, the Cornwall Triathlon also provides a weekend of fun and safe activity for athletes of any age and ability. Beginning with the “Young Champions Day” Races on Saturday, young budding athletes under the age of 14 can compete in Triathlon (swim, bike, run) or Duathlon (run, bike, run) events in their age category.  All youth events take place in and around the beautiful Cornwall Aquatic Centre.

All young competitors will receive a medal, and Bicycle World has donated a bicycle to the lucky winner of the draw prize on Saturday.

On Sunday, the event moves to École Secondaire L’Héritage as the home base for the adult athletes. Adults will swim in the St. Lawrence River, bike on a closed course through Le Village, and run on the Cornwall recreational path into the Gray’s Creek Conservation Area. Sunday includes events geared to any ability; starting from the introductory “Try-A-Tri” distance to the competitive Olympic distance.

“With both days of the Cornwall Triathlon nestled along the St. Lawrence River, participants are offered exceptional views while traversing our recreational paths during their events,” said Allen.

The Cornwall Triathlon, sponsored by Bourgon Construction, has partnered with the Boys & Girls Club of Cornwall and SDG. Proceeds from the event will go towards enhancing programs and operations for the youth in the Cornwall area.