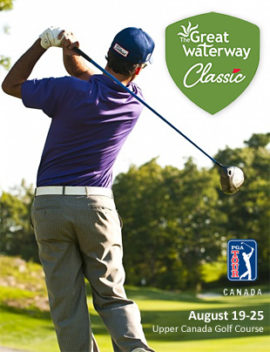 “This tournament is going to showcase some of the great golf in the region, and the players will be spoiled by the area’s activities and scenery, said PGA TOUR Canada President, Jeff Monday.”

The Canadian Junior Golf Association (CJGA) is the host for the tournament, and has invited a select few junior golfers to play in the tournament, giving spectators a first glimpse of Canada’s future golf stars.

Local golfers can get in on the action at the official PGA Tour Pro-Am on August 20th. Players will get glimpse of what it’s like to be on the PGA TOUR Canada while picking up valuable pro tips from PGA TOUR Canadian members.

“We are pleased to have Cornwall and The Counties Tourism on board with The Great Waterway Classic,” said Tournament Director Brad Parkins. “Volunteers are a major reason these types of events are a success, and having Cornwall and The Counties Tourism support this program will go a long way to the success of our event in The Great Waterway region.”

The sentiments were echoed at the tourism office.

The NAV CENTRE has been named the accommodations partner for The Great Waterway Classic. Situated on the St. Lawrence River in Cornwall, the NAV CENTRE is one of the largest facilities of its type in Eastern Ontario, featuring 551 rooms, fitness centre, spa, onsite restaurant and pub.

“The NAV CENTRE is a first class facility with first class amenities,” said Brad Parkins, Tournament Director for The Great Waterway Classic. “It will be a great home base and provide great hospitality to all the players and guests we have participating in this years event.”

You can learn more about the tournament here:

About the Great Waterway Classic

The Great Waterway Classic has been designed to showcase some of Eastern Ontario’s best golf courses. The inaugural event was held last summer at Smuggler’s Glen near Gananoque, where rising golf star Eugene Wong took home the trophy in an exciting one-stroke. In 2014, the Classic will head to the Loyalist Country Club in Bath, followed by a visit to Black Bear Ridge Golf Course in Belleville in 2015.

PGA TOUR Canada is a series of $150,000 events to be played across Canada this summer. The leading five money winners at the end of the season will earn highly placed status on the Web.com Tour in 2014.

PGA TOUR Canada’s mission is to deliver a PGA TOUR experience for our members, fans, volunteers and our partners in order to develop the future stars of professional golf & enrich the communities we visit.

About The Great Waterway

The Great Waterway was established in 2010 to promote and invest in tourism along Lake Ontario and the St. Lawrence River, from Prince Edward County in the West to the Quebec border in the East. The Great Waterway region includes unique towns, villages and cities of Quinte West, Belleville, Kingston, Gananoque, Brockville, and Cornwall.

Upper Canada Golf Course has long been called a hidden jewel of golf in Canada, known for its great playing conditions since it was built in the 60’s. At 6,922 yards, the Robbie Robinson design winds through evergreen and deciduous trees and along waterways, challenging beginners and skilled players alike.