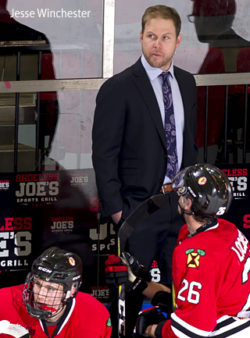 Jesse Winchester named Coach of the Year by CCHL


Cornwall Ontario – Jesse Winchester has been named Coach of the Year by the Central Canada Hockey League.

The Cornwall native is completing his first year as head coach of the Brockville Braves. Coach Winchester has led his Braves to a third place finish with 76 points and a 25-19-4 record.

The rookie coach takes home the hardware after playing parts of eight seasons in the NHL with the Ottawa Senators, Florida Panthers and Colorado Avalanche. He took a few years off after retiring from professional hockey in 2014 before joining Brockville this year.

Braves star goaltender Justin Evenson gives a lot of credit to Winchester on the team’s success.

“Winch has been the backbone since the beginning for us,” says Braves goaltender Justin Evenson. “He is the best all-around coach I have ever had the opportunity to play for. He brings the knowledge of the game, Intensity, passion and knows what he expects from guys in order to give it everything you have every night for him.”

Evenson also said that he acts as a mentor to all the players on the Braves, teaching them how to play the right way.

“He is just as much as a teacher and mentor of the game as well as a friend and an asset to life lessons. He brings a fire every day to the ice that the guys on the team just feed off. When he says something- you listen, you respect him and you respond to it because you know who it’s coming from and he knows firsthand what it takes to get to the places we all want to go.”

Braves captain Andrew Jarvis said he deserves this award so much because he cares so much about his players and wants the best out of them.

“He’s done an unbelievable job with us. Always making us better in every situation even away from the rink. His care rubs off on the team and we all unite and want to win for him and for each other. We’ve listened to him all year and we’ve bought in, he’s getting the coach of the year because he deserves it!” said Jarvis.

Jesse Winchester spent one season in the EOJHL Jr. B (Now CCHL2) before playing for his hometown Cornwall Colts for three seasons from 2001-2004. He scored 78 points in 38 games as a 16 year old with the Winchester Hawks and recorded a career 150 points in 98 games with the Colts over three years. He then committed to Colgate University where he played four seasons and made his NHL debut in 2008 with the Ottawa Senators.

Jesse Winchester was featured with a cover story in the 2014 edition of Cornwall Living magazine.

There are 12 teams in the CCHL, including the Cornwall Colts which play out the Civic  Complex.

Players from all over North America have enjoyed success playing in the Central Canada Hockey League.  For many players, the CCHL is a stepping stone to the NCAA, Ontario Hockey League as well as the National Hockey League.