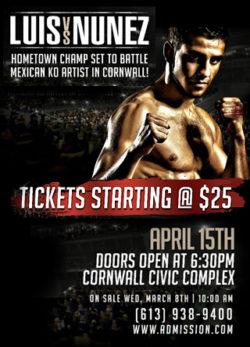 Lightning Set to Strike in Cornwall


Cornwall Ontario –  Cornwall native Tony “Lightning” Luis spent the last nine years globetrotting, racking up wins. Now his fans will get the opportunity to see him in the ring in person, instead of on a TV screen.

On April 15, Tony will put his boxing future on the line against Noe “El Dengue” Nuñez at the Cornwall Civic Complex.

The match will see Luis (22-3, 7 KOs) battle Nunez (17-4-1, 13 KOs) in a scheduled 10-round clash pitting Luis’ speed and savvy against the taller, aggressive Mexican lightweight. Luis faces a must-win scenario to advance his career as a professional boxer.

“Every fight for me is to get one step closer to a world title shot,” Luis said. “I need to keep winning.”

A win in Cornwall, in front of his hometown fans, will propel Luis high into the world rankings and set him up for a title bout in the near future. His record against some of the world’s top talent, including an upset over the formerly undefeated Karl Dargan, puts Luis on the cusp of title contention.

“Nuñez is a tough, talented guy. He packs a dangerous punch,” Luis said. “I’ve got to showcase my hand speed and abilities to get past him and get the win.”

Akwesasne’s Ronnie “Rocket” Robidoux, who trains in Cornwall, looks to keep his perfect record of 2-0 (2 KOs) in tact as he faces Mexico’s Jesus Ortego.

Another pupil of Jorge Luis, Ireland’s “Lethal” Larry Fryers (2-0, 1 KO), who is known for his relentless aggression and fighting style, will face off against Mexico’s Michel Polina over four rounds.

“We’ve wanted a fight here for a long time,” said Jorge Luis, who runs Champs Eastside Boxing. “I hope the city will support it and it goes well. If it does, I could see more shows in the future.”

“It doesn’t get any better than this,” says Ron Sanderson, CEO of Liveco Boxing. “These matches, with Tony as the headliner and Ronnie and Larry on the undercard, will make for an electrifying evening of boxing. We’re looking for fireworks and a ton of excitement out of these fighters. And we’re especially looking forward to seeing Tony take this huge leap forward in his career.”

Situated in scenic Lamoureux Park on the banks of the St. Lawrence River, the Cornwall Civic Complex is a highly versatile and modern facility that includes the 5,000 seat Ed Lumley Arena, Cornwall Sports Hall of Fame and Aquatic Centre.