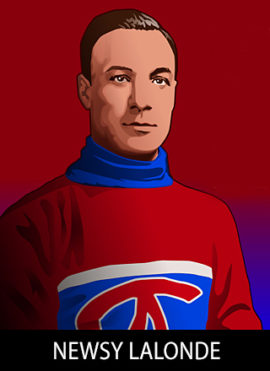 
Cornwall Ontario – A Canadian and Cornwall sports legend will be recognized on Thursday July 21st with the unveiling of a new provincial plaque and a community celebration in his honour.

Cornwall City Council has proclaimed Thursday as Newsy Lalonde Day in Cornwall and there are a number special events planned to mark the occasion. Residents are invited to join in the festivities taking place on the arena floor of the Cornwall Civic Complex from 10 am – 2 pm.

“It’s going to be a great celebration of hockey and one of our hometown heroes,” said Mayor Leslie O’Shaughnessy.

The highlight of the day will be the unveiling of a new provincial plaque recognizing Édouard Newsy Lalonde as one of the original ‘Flying Frenchmen’ from hockey’s early days. The ceremony will be held at 11 am and it is being coordinated by the Ontario Heritage Trust in partnership with the Cornwall Sports Hall of Fame and the City of Cornwall.

In addition to the plaque unveiling, there will be a number of free activities (subject to change) for visitors to enjoy including:

Perhaps the very first “superstar” of early professional hockey, Édouard Lalonde was born in Cornwall Ontario on October 31, 1887. He gained the nickname “Newsy”, due to his job working at the local Standard newspaper.

Newsy began his hockey career at the age of 16 playing for the Cornwall Rovers. In the 1904, he played with the Cornwall Victorias of the Federal Amateur Hockey League (FAHL) before moving on to Sault Ste. Marie, Ontario in 1906 to play in the International Professional Hockey League, hockey’s first known professional league.

Newsy helped the Montreal Canadiens win their first Stanley Cup in 1916. He would score in each of the first six NHL games, earning a share of an NHL record with Cy Denneny and Joe Malone to establish an NHL record that would go unmatched for nearly 90 years.

Some notable achievements from his hockey career:

During the off season, Newsy spent his summers playing lacrosse, in which he showed an equal amount of aptitude and was named “athlete of the half century” for the sport. He started play in 1905 as a goaltender, but moved to the attack position in 1910, becoming the sport’s greatest star. He would break the scoring record for his Montreal team in 1910 with 31 goals. Lalonde scored an incredible 66 goals for the Montreal Nationals in 1914. He was inducted into the Lacrosse Hall of Fame in 1965.

The Cornwall Sports Hall of Fame

The aim and purpose of the Cornwall Sports Hall of Fame is to honour Cornwall citizens who have, by their superior ability, effort and achievement, brought fame to Cornwall in their field of sport.

The Cornwall Sports Hall of Fame also manages a website that has hundreds of inductee bios and photos. You can find out more at www.CornwallSportsHallofFame.com