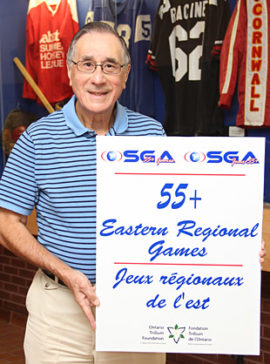 
Cornwall Ontario – Organizers are busy taking care of last minute details for the 55+ Eastern Regional games which will take place on August 20, in Cornwall and area.

The Eastern Region of the Ontario Senior Games Association comprises seven districts stretching from the Québec border in the east to Kingston and Frontenac, and Renfrew in the west. Its northern and southern borders are the Ottawa and St. Lawrence rivers respectively.

Over 400 participants from the eastern region are registered for the games, said Baker. Additionally, 68 people are involved as convenors, non-participants, volunteers and officials. The most popular game is bowling, singles and team, whose participants number close to 100. The next popular games are golf with 45 players and floor shuffleboard with 41 players.

District 8 has the distinction of fielding three teams in men’s doubles tennis in the 75+ age category.

The day ends with a closing banquet in Cornwall’s Civic Centre. During the banquet, the participants will be entertained by a slide show of the day’s activities and by Glengarry’s Celtic musical group, the Brigadoons.

The games will be played at the following venues, with their respective start times:

The public is encouraged to come out and cheer on the participants. Additionally, participants are being sought for the winter games being held later this year.