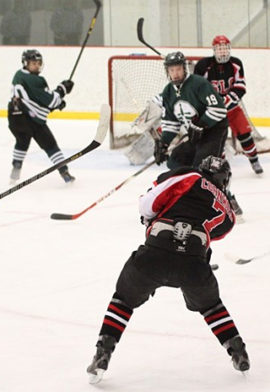 
Cornwall Ontario – It was just not in the cards for the SLC Sharks men’s hockey team in the Championship game at the 2015 Challenge Cup.

SLC battled hard right from puck drop, but ultimately couldn’t capitalize on the limited scoring chances they had against the talented team from Trent University, losing 2-0 and settling for the silver medal.

“We needed to score early on when we had a couple of chances” said Sharks coach, Sean Boulerice. “But we either missed the net, had our shot blocked, or the Trent goalie robbed us. They (Trent University Excalibur) are a talented team, and have been all season.”

You wouldn’t know by the way the teams were playing that they had both already played two games that day, but players from Trent and SLC were flying down the ice looking to take an early lead.

SLC looked to have a slight edge in shots halfway through the first period, but Trent responded with five solid minutes of pressure that ended in a big SLC shot block that preserved the scoreless tie.

Trent would open the scoring early in the second period, with an Excalibur forward sneaking in-behind the SLC defense on a partial breakaway. SLC responded with good offensive pressure through shots coming from the point and getting sticks on the puck on it’s way to the Trent goal, but ultimately not the back of the net.

The Sharks had a great two minute powerplay that produced a few scoring chances, but once again SLC couldn’t capitalize on their opportunity. There was a nerve racking two-minute stretch that had all five SLC players on the ice for an extended shift that, but the Sharks were saved by the second period buzzer before Trent could spend more time in the offensive end.

Trent dictated the play to start the third with SLC looking out-of-sync in their own end with several passes missing the tape to escape the defensive zone. Sharks goaltender Ryan Cooper was keeping SLC in it, making several stops down the stretch.

After missing on a glorious odd man rush chance, the Sharks caught themselves puck watching on a pretty tic-tac-toe Excalibur goal that had a Trent player all alone at the side of the net.

SLC would call a timeout in the final minute of the game to draw up a play, but never got the chance to produce a scoring opportunity, resulting in the Sharks settling for the Silver medal.

“The experiences we had over the year mean more than a medal or trophy ever could” said Sharks coach Mike Pettinella.

“This loss still hurts but we have a great group of young men in the locker room that have made lasting friendships and experiences as part of being a member of the Sharks hockey club.”

The coaches, players, and athletics staff would like to thank all the volunteers for their help putting on the Challenge Cup, TV Cogeco for providing live TV coverage of both semifinal games and the Championship game, and finally to all the fans that came out to all five SLC games.

The players and coaches loved playing in front of their friends and family in their own rink. It made the experience of playing in the Challenge Cup that much more special.

About the Challenge Cup

The Challenge Cup is the year-end Championship for extramural College hockey teams across Ontario. Twelve teams were involved in the 2015 Tournament.