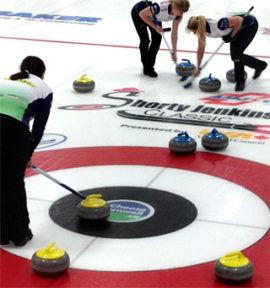 Shorty Jenkins Classic Has a New Home in Cornwall


Cornwall Ontario – The AMJ Campbell Shorty Jenkins Classic will continue to bring the world’s curling elite to Eastern Ontario, however after almost two decades years in Brockville, the popular bonspiel is moving down the road to Cornwall Ontario.

And its founder and Chair of the event, Gord McCrady Jr., is thrilled about what Cornwall has in store as the Shorty’s new host city.

“We believe that Cornwall offers a better chance for the AMJ Campbell Shorty Jenkins Classic to continue to establish its position as one of the world’s premiere bonspiels,” said Mr. McCrady. “Cornwall has the infrastructure and support network that can meet the demand of today’s professional sporting events.”

The AMJ Campbell Shorty Jenkins Classic is part of the World Curling Tour, and has long attracted top Canadian and International curlers.

In 2015, a broken compressor at the Brockville Country Club forced the organizers to move the event at the last minute to Cornwall. In just over three weeks, Cornwall hurried hard and secured 40 sponsors and raised over $30,000 in sponsorship. The Cornwall retail and hospitality sectors came to the table with support and were grateful for the opportunity.

“City officials and volunteers bent over backwards to ensure the event was a success,” said Mr. McCrady. “Most importantly, the curlers were very happy with the welcoming attitude, great facilities and overall organization.”

Cornwall Curling Centre officials are thrilled with the news that the Shorty Jenkins Classic will be returning to Cornwall.

“We estimate that the AMJ Campbell Shorty Jenkins Classic contributed between $300,000 and $500,000 in economic spin-off for Cornwall and we plan to make that grow in the coming years,” said John DiLabio of the Cornwall Curling Centre. “We are thankful to Gord for the opportunity and look forward to further mobilizing our local businesses and community to make it a signature event from which everyone will win.”

McCrady said he is confident Cornwall will be true to its word in making the 2016 Shorty a success.

“If our Cornwall team can do what they did in a mere three weeks, I can only imagine what they will accomplish with nine months of planning time. They have the energy, the motivation and the vision for a long-term play on this event,” he said.

The Cornwall Curling Centre has an energetic volunteer team in place and is preparing a five-year plan to ensure the event grows and stays in Cornwall beyond 2016. McCrady will remain Chair of the event for 2016 with the support of the Cornwall volunteers and community.

“We had a good run in Brockville,” said Mr. McCrady. “Unfortunately, support for the event was not where it was in the past, and shrinking corporate sponsorship dollars made the move necessary.”

McCrady applauded his volunteer committee of seven who have been the backbone of the Shorty, and thanked the dozens of sponsors and hundreds of volunteers who helped us grow the event to the where it is today.

“Our primary focus is to put on a great event, look after the athletes and ensure everyone has a positive experience – all the while honouring the memory of one of the true innovators in the sport of curling,” said Mr. McCrady. “We look forward to welcoming the world to the 2016 Shorty Jenkins in September.”

About the Shorty Jenkins Classic

The Shorty Jenkins Classic Bonspiel is one of the first curling tournaments of the World Curling Tour season. The bonspiel is held in honour of Shorty Jenkins, who is widely regarded as one of the most innovative and influential icemakers in the sport of curling.

The 2015 event was held over 4 days in September, and attracted 24 mens and 12 ladies teams, including Olympic Gold medallist skip Brad Jacobs along with teams skipped by Glenn Howard and Brad Gushue and Sherry Middaugh. The tournament also featured Cornwall’s own Mathew Camm.

The Shorty Jenkins Classic is featured in the 2015 Year in Review report. You can download the report here: