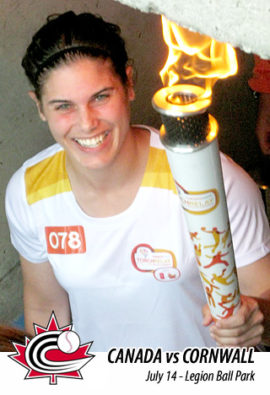 Team Canada To Take The Mound Against Cornwall


Cornwall Ontario – Team Canada is taking to the mound in Cornwall next Tuesday, and its shaping up to be a great night of sport and friendship.

The Women’s National Baseball team have included Cornwall as a key warm-up game as they prepare to make history at the Pan Am games.

“We have a great team of committed athletes, and I am thrilled that I can showcase our game in my hometown,” says Jenna Flannigan, a long-time member of Team Canada who is expected to start in the outfield for head coach André Lachance.

Jenna recently carried the Pan Am torch at a recent Ottawa Champions professional baseball game where she ran the bases with the torch before the game and threw out the first pitch.

Team Canada will face off against the Cornwall River Rats Men’s Senior Team which plays in the National Capital Baseball League. According to Coach John Flannigan, the game will be a competitive match that should prove to be exciting for fans.

“Jenna plays on the River Rats when she is not with Team Canada, so she is very familiar with the level  of play,” says Mr. Flannigan.

The Pan Am Games will be a historic event for the Canadian Women’s National Baseball Team with women’s baseball being included on the sport program for the first time ever at a major multi-sport games.  Canada has captured four medals (one silver, three bronze) in six world championship events since the International Baseball Federation (IBAF) introduced the Women’s Baseball World Cup in 2004.

The Cornwall game is part of a nine game pre-tournament warm-up schedule that will see Team Canada play teams from Nova Scotia, Quebec and Ontario. Following Cornwall, Team Canada will play warm up games against Puerto Rico and the USA before opening the Pan-Am Games against Cuba on July 20.

Volunteers have been working hard to get Legion Park ready for the game, and local businesses have come on board as well. TVCogeoco will film the game on scaffolding provided by Leblanc & Son Roofing. Subway (Irving Truck Stop) will be providing an aftergame meal for Team Canada. Gordie Van Putten is donating his time to umpire the game and Kaleigh Styles will sing the National anthem. The City of Cornwall has also assisted with park maintenance and promotion of the event.

Game Time is 6:00pm on Tuesday July 14 at Legion Park. All are welcome to cheer on both teams. There is no cost to watch the game.

Legion Park is situated at the foot of Marlborough Street along the banks of the St. Lawrence River. The Park has hosted both provincial and national championships in the past and is home to Cornwall District Minor Baseball. The Park was created through the efforts of the Cornwall Legion, Branch 297.