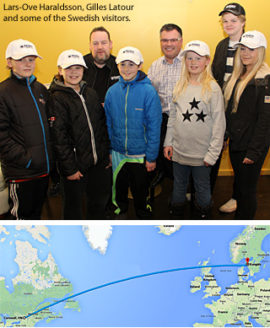 
Cornwall Ontario – Cornwall is home to some very special visitors this week from Kungälv, Sweden.

A group of 43 hockey players and their families have made the 20 hour journey to Cornwall and are quickly making friends wherever they go. While in Cornwall, hockey has been arranged with the Seaway Valley Rapids hockey organization.

It is the 8th Kungälv-Cornwall trip in 9 years, says organizer Lars-Ove Haraldsson, who estimates that about 425 people have made the trek over the years.

“Cornwall is a great community, and we feel so welcome here,” said Mr. Haraldsson. “It is an experience that stays with these children forever.”

The delegation arrived in Cornwall late last night and were welcomed by cheering Rapids players.  Each of the 15 hockey players will be billeted with a Rapids player, and will attend school with them during the week.

Swedish parents and other family members will stay at the Cornwall Ramada, and throughout the week take the opportunity to explore Cornwall. Today included shopping downtown at Cornwall Square and having lunch at Truffles Burger Bar.

“We are building a great friendship between Kungälv and Cornwall that gets stronger every year,” said Gilles Latour, Chair of Team Cornwall. “It is a wonderful opportunity for Cornwall to introduce these families to Canada.”

On Thursday, Swedish players and coaches will visit and volunteer at the Agape Centre and then the focus will shift to the big friendly game on Friday as Team Sweden faces off against Team Canada. The puck drops at 5:00pm at the Benson Centre and the public is welcome to attend.

Our Swedish visitors will spend the weekend in Cornwall which includes a visit to a local sugar camp before heading out to the Hockey Hall of Fame in Toronto and then on to Niagara Falls.

Mr. Haraldsson works on sporting events for Swedish Television and the Kungälv -Sweden connection started with former Cornwall Aces star Niklas Andersson, whose hometown is Kungälv. Mr. Andersson was in Cornwall two years ago with his son and family as part of the annual hockey trip, and this year his nephew has made the trek.

Mr. Haraldsson expects to be back next year with an even bigger group.

“Each year we are asked by Canadian Customs: Why Cornwall?” said Mr. Haraldsson. “And each year I reply, why not? Cornwall is a great place!”

Kungälv is a city of about 23,000 and is located in the southwestern part of Sweden.