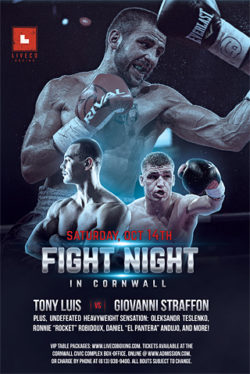 
Cornwall Ontario – Tony “Lightning” Luis will put his Lightweight Championship title and five fight win streak on the line when he takes on Giovanni “Impacto” Straffon of Mexico in at the Cornwall Civic Complex.

Luis (24-3 8KO’s), now ranked 12th in the world by the World Boxing Association, won the title back in June with a dominant victory over previously undefeated Cam O’Connell (15-0 10KO’s).  A win against Straffon(14-2-1 9KO’s), a powerful and talented young boxer with only two defeats in his seven-years as a pro, will elevate Luis’s ranking even higher, and place him one step closer to challenging for a World Title.

“I’m excited to defend my belt in my hometown”, Luis said.  “Mexicans are known to be warriors and bring the heat every time.  I expect Straffon to be no different.  That’s what I like.  The biggest winners will be the fans”.

Unbeaten Heavyweight Sensation Oleksandr Teslenko will fight in a co-feature bout. Teslenko (10-0 8KO’s), born and raised in Chernivtsi, Ukraine (now living in Toronto), was a highly decorated amateur standout with 250 bouts to his credit, winning 224 of them.  Regarded by many boxing experts as “the next big thing in boxing”, Teslenko’s ring generalship, speed and power create fireworks in the ring.

The Saturday night show will also feature an array of talent on the undercard, with undefeated Akwesasne native Ronnie “Rocket” Robidoux (4-0 2KO’s) looking to keep his perfect professional record intact in a 4-round Middleweight bout and fan favourite Daniel “El Pantera” Andujo of California in a 4-round Super Flyweight contest.

Liveco Boxing is a California-based boxing promoter that was founded in 2016 with the purpose of bringing back a higher standard of ethics to the boxing industry.  Liveco’s “Fighter First” philosophy makes them the company of choice for professional fighters looking for a hands-on, personal approach to promotion.  For more information, visit www.livecoboxing.com.

The Civic Complex has hosted a number of special events in recent years such as the World Junior Exhibition Game, RBC Cup National Junior A Hockey Championship and concerts by Hedley, Nickelback, Great Big Sea, Alice Cooper and Blue Rodeo.