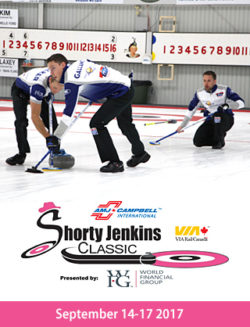 
ornwall Ontario – Forty of the top Curling teams from across the globe will converge on Cornwall’s Curling Centre from September 14 – 17, 2017 to participate in the 21st Annual AMJ Campbell Shorty Jenkins Curling Classic, a World Curling Tour event presented by WFG Financial Group.

The longest running event on the World Curling Tour will feature a who’s who of the curling world and will be a chance for everyone in Cornwall to meet and see the greatest curlers in the world in a very personal setting.

The field includes 2014 Olympic gold medalist Brad Jacobs from Canada, the bronze medalist, Niklas Edin from Sweden, and the current Tim Horton’s Brier Champion Brad Gushue.  Additionally, the field will have other world champs and Brier champions such as Ontario’s Glenn Howard, Manitoba’s Mike McEwen, 2014 World Champion Thomas Ulsrud from Norway, as well as other teams from Canada, Scotland, Korea, Switzerland, Japan, Netherlands and the United States.  The Men’s and Ladies’ event has a combined purse of $90,000, which is proudly the largest purse during the World Curling Tour season, outside of the Grand Slam Events. In, fact the Shorty Jenkins Classic is now been nicknamed the Mini-Slam.

Locally, Cornwall is very proud that one of its own will be competing in this year’s event. Matt Camm, former Jacques Richard Memorial Trophy recipient, plays third for John Epping’s rink.

“Cornwall is fortunate to have an event like this – the strength of the field is a testament to the legacy that this event has created over the past 20 years,” says John Dilabio, Co-Chair of the Event.  “This event is an opportunity for Cornwall to show off our City to competitors from around the world.  The players are very accessible and enjoy meeting and talking to people from the area.”

The Shorty Jenkins Classic Bonspiel is held in honour of Shorty Jenkins, who is widely regarded as one of the most innovative and influential icemakers in the sport of curling.

The AMJ Campbell Shorty Jenkins Classic will take place at the Cornwall Curling Centre beginning on Thursday, Sept. 14th at 12:30 p.m. and will continue through to Sunday, September 17th with the final match at 3:00 p.m. Everyone is welcome.

Information regarding schedule, teams and events will be available at