Cornwall Ontario –  The St. Lawrence Seaway Management Corporation today marked its 60th anniversary with the opening of the 2019 navigation season. The Federal Kumano served as the opening vessel, as the ship loaded with a bulk cargo of titanium chloride transited the St. Lambert Lock on its way to the Port of Ashtabula, Ohio. 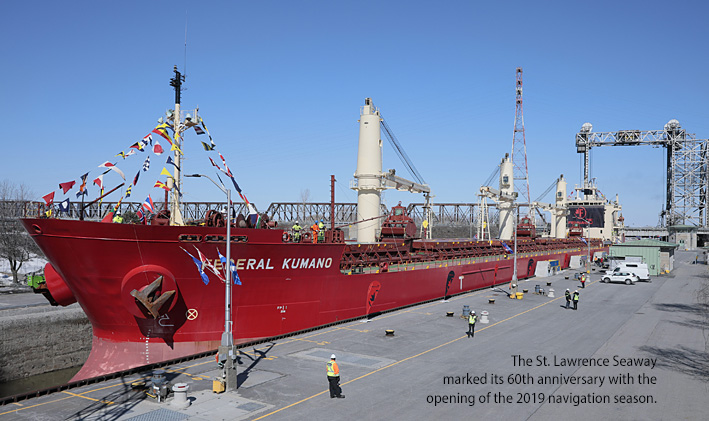 “The St. Lawrence Seaway has a distinguished past, a dynamic and vital present and will continue to play a pivotal role in Canada’s economy in the future,” said Marc Garneau, Minister of Transport. “It is with that in mind that the Government of Canada is continuously working with the Seaway and its partners to look at opportunities for increased economic and commercial developments and to move towards a more sustainable future.”

“Today, thanks to the many efforts of both past and present employees, we have a Seaway that offers carriers a more competitive route to the heartland of North America,” said Terence Bowles, President and CEO of The St. Lawrence Seaway Management Corporation. “With strong advancements in safety, reliability and efficiency, the Seaway is equipped to effectively serve its stakeholders for decades to come. A multi-billion dollar fleet renewal program being undertaken by Seaway carriers points to a bright future ahead for the waterway as it celebrates its 60th anniversary.”

As the most energy efficient mode of transportation, with the lowest carbon footprint, marine transportation offers an attractive means of boosting economic activity in a sustainable manner.

“As the binational waterway turns 60, it is resilient and ready for the future,” said Craig H. Middlebrook, Deputy Administrator of the U.S. Saint Lawrence Seaway Development Corporation. “New technologies, an exceptional reliability record, and significant investments in infrastructure are enhancing efficiencies and keeping the Seaway safe and competitive.”

The St. Lawrence Seaway Management Corporation was established in 1998 as a not-for-profit corporation by the Government of Canada, Seaway users and other key stakeholders. In accordance with provisions of the Canada Marine Act, the Corporation manages and operates the Canadian assets of the St. Lawrence Seaway, which remain the property of the Government of Canada, under a long-term agreement with Transport Canada.