Cornwall Ontario – Congregations of Jehovah’s Witnesses from Ontario and Quebec are coming to Cornwall. 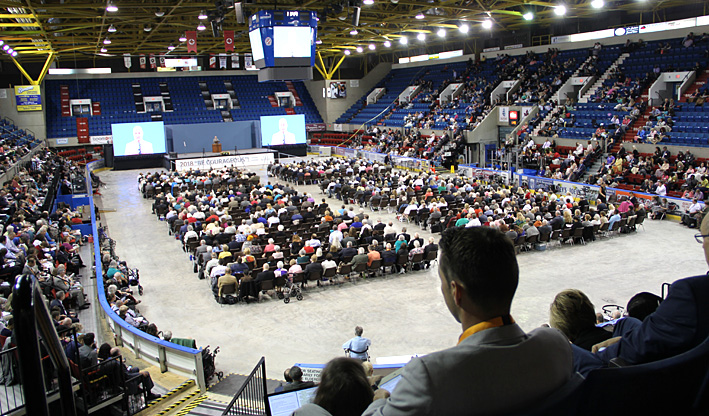 It will be the 22nd time that the Watch Tower convention has set up in the Seaway City, bringing thousands of people to the Cornwall Civic Complex. This year’s three day convention runs from Friday June 7th to Sunday June 9th and is expected to attract up to 3,200 delegates.   The English regional convention has combined several convention groups and moved to the Canadian Tire Centre in Ottawa this year – July 12 to July 14.

“Cornwall is truly a convention City, and no matter at what level you find yourself, the visitor gets the ‘down home’ feeling, and is looking forward to coming again,” says Christian Rousseau, local media contact for Watch Tower,

The theme of this year’s convention is “Love Never Fails!”  and the program consists of many presentations that will include talks, audio dramas, interviews and short videos.

The public is invited to attend any session or the entire program at the Cornwall Civic Complex & Convention Centre.  It is part of a world wide Bible educational work that is for all races, cultures, and languages.  There is no admission fee as the Conventions of Jehovah’s Witnesses are supported entirely by voluntary donations.

“We are delighted to host this important event once again”, said Janice Robinson, Facilities Rental Co-ordinator.  “The organizers work very hard each year to put on such a successful convention.  We have been so fortunate to work with Watch Tower since 1998, they have truly become a part of our community”.

The estimated economic spin off in the community will be upwards of $2.25 million dollars.