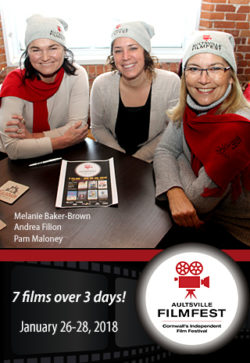 
Cornwall Ontario – Cinemas fans from across the region are making time for the Aultsville Filmfest, which will air 7 films over 3 days starting January 26.

“We are excited to bring Filmfest back for a 12th year, says Pam Maloney, member of the Filmfest Organizing Committee. “We have folks from Ottawa, Toronto, Montreal and beyond who come just for this event and and stay for the weekend.”

This year’s line up includes films from France, UK, Switzerland, Israel, Columbia, Sweden, and USA. Films are selected from the Toronto International Film Festival – Film Circuit which helps distribute independent films to small communities. Other films are sourced by the committee to ensure a diverse festival journey!

“Our Saturday night feature, The Florida Project, has been getting a lot of buzz, with a Golden Globe Nomination for William Dafoe,” notes Ms. Maloney.

The Aultsville Filmfest is an annual event that brings Independent Film to Cornwall, and raises money to support operations and refurbishment at Aultsville Theatre.

People can buy tickets to individual films at the theatre prior to each screening, or at the Civic Complex Box Office. Weekend passes are also available that provide tickets to all 7 films, along with access to wine/food receptions, coffee and snacks between films. All festival screenings take place at Aultsville Theatre.

More detail on the festival program can be found at www.aultsvilletheatre.com. Check the website often for screening times and updates.

Filmfest Lineup
Here is a closer look at the films:

From the Land of the Moon

Telling the tale of a woman stuck in a loveless marriage with a man twice her age, Lady Macbeth premiered at the Toronto International Film Festival to stellar reviews and has gathered five awards at the British Independent Film Awards.

Taking place during the crux of the women’s suffrage movement, this 2017 drama showcases a small Swiss village and the women who demand a change to the status quo. The film skillfully blends comedy and drama and was selected as the Swiss entry for the Best Foreign Language Film at the Academy Awards.

Offering the audience Willem Dafoe’s greatest performance in years and premiering at the 2017 Cannes Film Festival, The Florida Project is a heartwarming drama that showcases the challenges of American life through the eyes of a six year old.

In Between follows three Palestinian women living together in modern day Tel Aviv, forced with questioning their faith and traditions to walk their own path. The drama premiered at the 2016 Toronto International Film Festival and took home the NETPAC Award for World or International Asian Film Premiere.

Bad Lucky Goat follows the quirky journey of a brother and sister during the 24 hours after accidentally running over a goat. Guaranteed to have the audience in hysterics, this comedy is a tale you won’t soon forget.

Based on the international best-selling novel of the same name, A Man Called Ove is a dramatic dark comedy that explores the loneliness that ageing can bring. The film was nominated for two Academy Awards including Best International Film.