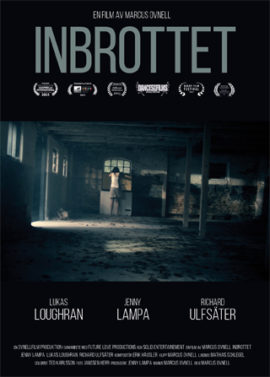 
Cornwall Ontario – The Swedish award winning film, The Break-in will make its Canadian premiere at the Port Theatre this Friday. And attending the premiere will be the film’s director Marcus Ovnell, who also wrote the screenplay and edited the film.

The movie follows a married couple (Jenny Lampa and Lukas Loughran) who go to bed but soon realize that someone is in the house. The crisis that follows brings the couple closer together, but also brings the relationship to a clash when reality comes knocking on the door. It is described as a movie about love and living with a secret.

The movie, originally titled Inbrottet, is in Swedish with English subtitles. The film has taken top place at the Gasparilla, New Hope, Milan and Madrid Film Festivals, and has been nominated for 23 other awards.

You can view a trailer for the film here.

The event would not have been possible without the efforts of local film critic Nikolai Adams.

“I had been to the St. Lawrence International Film Festival (in Canton New York) and met a very nice Swedish director named Marcus Ovnell,” said Adams. “He has his own film production company. He wrote the film, he directed the film and he edited the film.”

Later, Nik contacted Ovnell by e-mail to see if Cornwall could get the movie. The Director not only agreed to provide it but announced he would like to come to Cornwall for the premiere screening.

Ovnell was quick to praise Adams for his initiative.

“Everything is thanks to (him). We met when The Break-In was screened at the St. Lawrence International Film Festival. He proposed the idea and I really liked being part of the reopening of a cinema.”

The Break-In is the first feature length film produced by his production company Ovnellfilm, which previously had completed a number of successful award-winning short films such as Afro and After the Party.

Along with the screening, plans are to give Mr. Ovnell a celebrity tour of the City which includes signing the ‘Book of Recognition’ at City Hall.

“We will take the opportunity do some  location scouting for my next film,” says Mr. Ovnell.  “I’m hoping to shoot in the Cornwall area and in Ottawa.”

Cornwall has a long connection with Sweden. Each spring it hosts hockey players, coaches and parents from Kungälv, Sweden. Over the past decade, over 500 Swedish people have made the trip to Cornwall.

About the Port Theatre

Touted as “Ontario’s most modern theatre” at its grand opening more than 60 years ago, Cornwall’s Port Theatre – then named the Roxy – is a popular location for film and music performances. The art deco-style building has undergone various interior and exterior renovations since it opened on Dec. 26, 1941, and attending an event there is to experience Cornwall’s heritage.