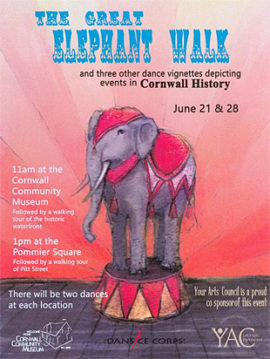 
Cornwall Ontario – To celebrate Cornwall’s rich history and beautiful waterfront, the Cornwall Community Museum has teamed up with Your Arts Council and :Dans/Ce Corps: to present a series of historic waterfront walking tours with a twist.

The Great Elephant Walk will offer a new take on Cornwall history by pairing walking tours with unique dance interpretations of four historic events from Cornwall’s past. The dances are being done by members of :Dans/Ce Corps:, a dance collective run by Amanda Marini-Rohde and Melanie Bennett under the umbrella of the Cornwall School of Dance.

“With this event, we’re hoping to attract a new audience and bring our past to life in a unique way,” said Ian Bowering, Curator of the Cornwall Community Museum. “Cornwall has such a rich and storied history to celebrate.”

The event will take place on Saturday, June 21st, with a repeat performance on Saturday, June 28th. It will get underway at the Cornwall Community Museum in Lamoureux Park at 11 am with two of the interpretive dances following by a walking tour of the waterfront.
The second stage of the event will start at 1 pm at Pommier Square (Pitt and Second Streets) with two more dances followed by a walking tour of Pitt Street.

The inspiration for the event’s name comes from one of the many colourful stories from Cornwall’s past that will be interpreted through dance. Here are a couple:

In the 19th century, circuses were quite popular in Ontario, and Cornwall was no exception. On one occasion, in order to keep the circus in Cornwall a bit longer, people thought it would be fun to see how well an elephant could swim. They raised $100 to entice the circus folks to let Mr. Elephant swim. He went into the water and immediately started for Cornwall Island. After trying in vain to turn him around, the elephant pushed through the boats and continued on to freedom on the island. It took a lot of effort to get him back to Cornwall and the circus decided never to return again. But, it did just one more time…

When Cornwall’s young boys learned that the circus parade led by elephants was going to pass through Cornwall in the dark of night, they hit upon a scheme to see them by scattering a bunch of potatoes along the road into town. Then they hid and watched. Around 2 am, the sound of wheels was heard as the parade approached Cornwall along Second Street. There was the elephant striding along between several strings of wagons. Suddenly he stopped, and began feeling about the road with his trunk. He struck a potato. The keeper did everything he could to get the elephant moving, but the elephant began a slow zig-zag course along the road, fearful of missing a single potato. The upshot was that the circus entered Cornwall, long after daybreak and the people of Cornwall got to see the circus free of charge.

In addition to the Great Elephant Walk, the dancers will also be showcasing stories about Cornwall’s early Loyalist settlers, the old neighbourhood of Smithville near the Domtar paper mill and the women workers of Cornwall’s cotton mills.

Everyone is welcome to come out and enjoy this unique historical event.