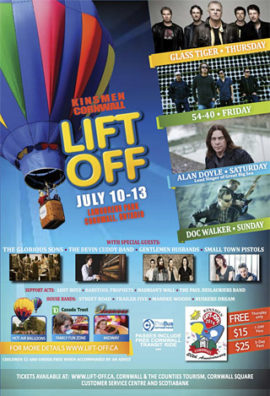 Lift-Off Gears Up For 20th Anniversary

It all takes place on the shores of the St. Lawrence River in Downtown Cornwall this July, from Thursday July 10th through Sunday July 13th.

Canadian music fans will also be delighted to hear that two of Cornwall’s most famous music exports will play this summer: Paul Deslaurers (recently named Blues Guitarist of the Year) and  the Barstool Prophets.

Festival co-chairs Jason Jesmer and Mary Marleau have also announced a new pricing structure that is sure to please.  A full festival pass will cost only $25, with Thursday night being free to all.

“The (weekend) pass is significantly reduced from last year,” said Jesmer. “We understand that it gets expensive, especially when you have a family, and we wanted to make sure that everyone can come out to enjoy the weekend.”

Festival passes are now on sale.