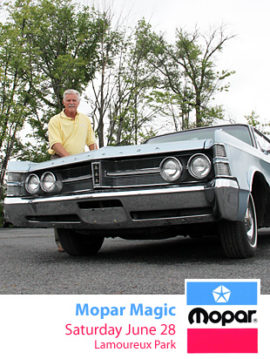 
Cornwall Ontario – Cornwall’s waterfront is about to get a bit shinier this Saturday.

About 300 well maintained cars and their proud owners will be participating in the 11th Annual Mopar Magic show Saturday June 28 at Lamoureux Park. It is easily one of the largest car shows in Eastern Ontario.

“We’ve attracted cars from Vermont, all over Quebec and Ontario, of course, and Upstate NY,” says event organizer Jack Notman. “We have become the largest single-day, Mopar-only event in Canada.”

Mopar refers to original equipment manufactured parts for Chrysler vehicles. The word, which dates back to 1920, has also become an inclusive word for any Chrysler-built vehicle. The Mopar Magic show will therefore feature strictly Chrysler brands such as Dodge, Chrysler, Plymouth, Desoto and Imperial.

“Tastes vary, as do the cars,” says Mr. Notman. “There is usually an interesting story behind every car, and that is part of the fun, meeting the owner and learning the history of the car.”

The event is free to the public, and attendees can vote for their favourite “People’s Choice” trophy winners.  The Mopar Special Events Caravan from Windsor/Detroit is making the trip to Cornwall for the show with a trailer load of parts, engines and accessories.  The event is also run as a fundraiser for the local Girl Guides who offer a day long BBQ and 50/50 draw.

Owning a car dealership was a natural career choice for Jack Notman, who has been collecting cars for 3 decades.

“As a kid I pumped gas at my Dad’s Fina and Shell gas stations and I’ve been involved in “old cars” ever since,” says Mr. Notman.  “I took it more seriously as a hobby once I was in my 20’s and started collecting, and trading old cars.”

Mopar Magic is sponsored solely by Notman Chrysler and is supported by a team of about 20 volunteers – primarily staff, friends and family.

“The first 3 years we held the show at the dealership but it soon became too large so with the City’s support, we moved it to beautiful Lamoureux Park,” says Mr. Notman. “It’s a great location to showcase Cornwall to all of our visitors.”