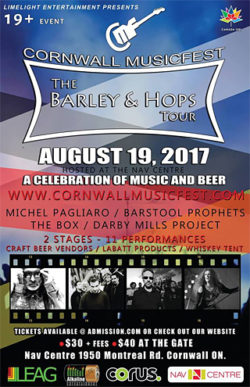 Limelight Entertainment has partnered with the NAV CENTRE, CORUS ENTERTAINMENT and ALKALINE ENTERTAINMENT to deliver a Signature celebration of Music and Beer for the City of Cornwall and surrounding communities – witness outstanding performances featuring some of the Country’s top recording artist and celebrate a day in the sun with visitors from the City of Cornwall, Akwesasne and the Counties of SDG – Eastern Ontario, Western Quebec and Northern New York State.

Michel Pagliaro, a Juno Nominated Canadian Rock Singer, Songwriter and Guitarist from Montreal, Quebec. Pagliaro is the first Canadian Artist to receive Gold Albums and score top 40 hits in both the Anglophone and Francophone pop charts in Canada. Pagliaro received the Governor Generals Performing Arts Award for Lifetime Artistic Achievement, Canada’s highest honor in the performing arts – Pagliaro has been honorably recognized by the Canadian Songwriters Hall of Fame and is a recipient of the SOCAN National Achievement Award.

Barstool Prophets, The hometown hero Barstool Prophets are a Canadian Rock Band that formed in Cornwall, Ontario – The band signed to Mercury Records and released Crank in 1995 and Last of the Big Game Hunters in 1997, toured Nationally on the big stage and featured many Canadian rock radio hits in the mid-late 90’s.

Darby Mills Project, Darby Mills is one of Canada’s iconic female rock vocalist, best known as the voice of the Juno nominated Canadian Rock Band the Headpins. She enjoyed a three album run at the top of the Canadian Charts, “Turn it Loud” quickly went Platinum and she toured in North America and Europe while opening for bands such as KISS, Whitesnake, ZZ Top and Aerosmith.

Let’s Rock the Shores of the St. Lawrence River and Celebrate Music and Beer

Stay tuned for more exciting news to come and visit us frequently at www.cornwallmusicfest.com for all the latest news