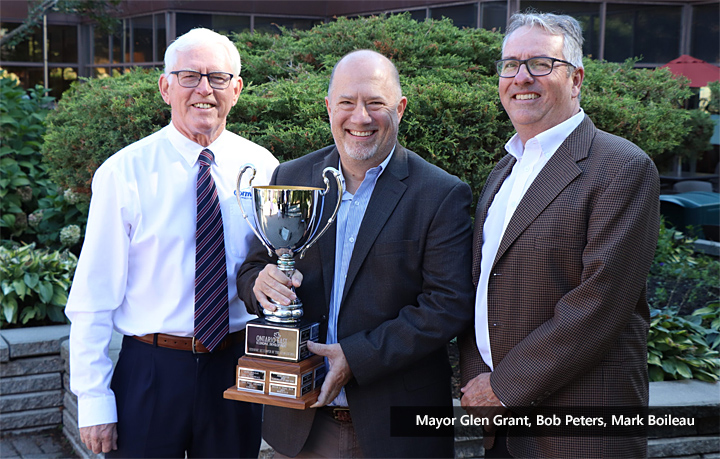 “Ontario East is pleased to recognize Bob for his efforts to promote his community and the region as a premier business location. We congratulate Bob on this important recognition and appreciate his continued support for our organization and towards economic development in Eastern Ontario,” commented Chris King, President of the Ontario East Economic Development Commission and CEO, Quinte Economic Development Commission.

With a career spanning over 30 years, Mr. Peters has been a leader in economic development and investment attraction supporting projects totaling more than $250 million for the region in recent years.  During the last 12 months alone, he has facilitated the sale of over 330 acres in the Cornwall Business Park which brought an initial investment value of $8 Million to the City and an estimated $1 Billion in revenue and investment over the next 3 years. Mr. Peters is also well regarded for his local responses and strong communication campaigns throughout the COVID-19 pandemic including the quickly developed Small Business Emergency Response Loan, the COVID-19 Daily Digest on the Choose Cornwall website, and the free “Business Reopening Toolkit” which was hand delivered to business in the community.

“Bob is a tremendous asset to the City and the Economic Development department,” said Mayor Glen Grant, City of Cornwall.  “He has a wealth of information and is always working to promote local business successes and development opportunities to those beyond the region.  On behalf of Cornwall City Council, I congratulate Bob on his career achievements and this very special award.”

The nomination submission was substantial and thorough, with many letters of support from peers, clients, and colleagues who have worked with Mr. Peters over the last 30 years.  Those who contributed spoke of his creativity, professional integrity, determination, and community-oriented strategies towards economic development.

“It has been my privilege to work with Bob over the past few years and to witness his extraordinary commitment to the Cornwall community,” stated Jay Amer, Executive Director of the Ontario East Economic Development Commission. “He brings innovation and determination to the role and has worked tirelessly to establish Cornwall as a major hub of business, manufacturing, and logistics activity in Eastern Ontario.  Bob’s leadership has been inspirational to his colleagues, peers, and business community and this award is so well deserved.”

The Ontario East EDO of the Year Award has been bestowed annually upon an economic development professional serving their community in eastern Ontario since 1997. The award recognizes excellence of an individual who has significantly demonstrated the execution of community economic development programming resulting in business growth, expansion and retention. Twenty-three awards have been granted since inception and the full list of award winners can be found online. Previous award winners from Cornwall include Paul Fitzpatrick (2001) and Mark Boileau (2009).

The 2022 award is sponsored by ResearchFDI, one of Canada’s leading investment attraction agencies, founded by Bruce Takefman, who was a member of the awards selection committee.

About the Ontario East Municipal Conference