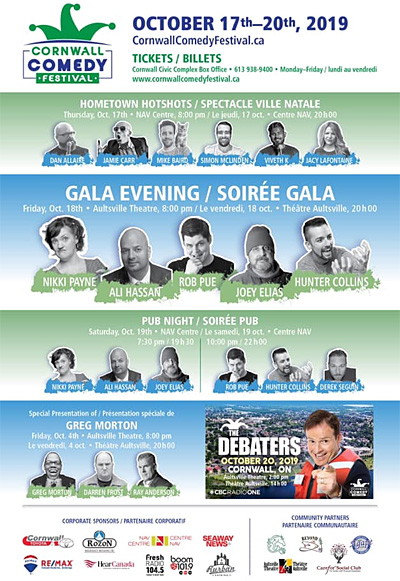 Cornwall Ontario – There will be plenty of big names – and big laughs – in store when the Cornwall Comedy Festival returns in October.

The fall event will feature some of the biggest names in comedy, including three-time Canadian Comedy Award winner Nikki Payne, the ‘Master of Impersonation’ Greg Morton and CBC’s The Debaters, among others.

“This edition of the Cornwall Comedy Festival is by far the most ambitious production to date,” said festival organizer Shawn Fowler. “We’ve assembled an awesome lineup and it’s going to be an amazing showcase of comedy.”

“We have some great local talent and this is a chance to showcase some of it,” Fowler adds.

Tickets can be purchased in person at the Cornwall Civic Complex Box Office or by phone (613 938 9400) Monday – Friday. You can also purchase tickets online by visiting www.cornwallcomedyfestival.ca/upcoming-shows.html

About the Cornwall Comedy Festival