Cornwall Ontario – Cornwall is going to be rocking this Canada Day weekend! 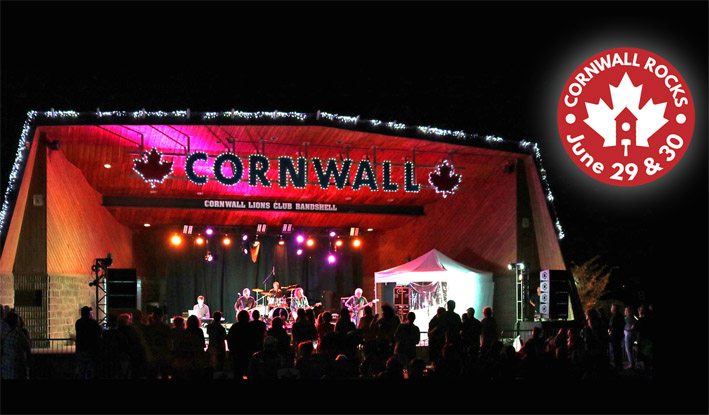 The traditional Canada Day festivities will be getting underway early with Cornwall Rocks, a new two-day music event on Saturday, June 29th and Sunday, June 30th in Lamoureux Park.

“We wanted to showcase some amazing local talent over the weekend and set the stage for the free Canada Day celebration on Monday,” says Lorne Taillon, Leisure Arts Cooordinator with the City of Cornwall. “We’re extremely happy to bring two world class artists with Cornwall roots to the Bandshell – the Barstool Prophets and Melanie Brulée.”

Gates open at 1 pm each day and attendees can expect a full slate of music to go along with food vendors and a beer tent (operated by the Optimist Club of Cornwall).

Cornwall Rocks will offer a variety of performers to suit every taste:

The Blushing Brides
The world’s longest and most successful tribute to the music of the Rolling Stones, having played over 4,000 shows since 1979.

Heroes of the Highland
A high-energy Celtic rock band based in Cornwall.

Andrew Cassara
An Ottawa-based singer songwriter with a musical sound in the vein of Maroon 5 and Justin Timerblake.

Capital Beatles
One of Canada’s greatest tribute acts to the one and only Beatles.

Owen Barney
A Toronto-based country artist who is rising up the charts and garnering a loyal following.

Grace Willison
A young singer-songwriter from Long Sault who records and performs original and popular pop, rock and country music.

Mr. C and the Hometown Horns
When attending a gig with these guys, prepare to wear your dancing shoes! Blues, swing and Rock & Roll will be on the setlist!

Arguably the biggest rock band to come out of Cornwall, the Prophets never fail to put on an amazing show.

This talented singer-songwriter is gaining international attention with her recent album Fires, Floods & Things We Leave Behind