Cornwall Ontario – Ontario Power Generation continues to make significant investment in Cornwall to ensure it will continue to produce clean, reliable, low-cost power for Ontario, and over the past several months that has added up to tens of millions of dollars. 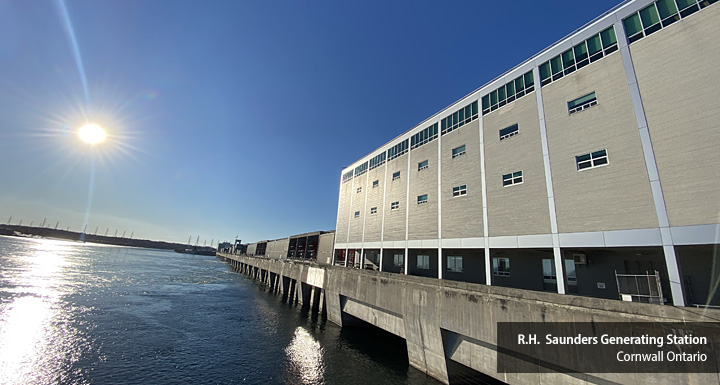 Significant work continued throughout 2022 as a total of 15 projects were in the design, planning or execution phase during the year. Some of the larger ongoing projects included:

“We are relied upon each and every day at R.H. Saunders GS to provide a significant amount of clean, renewable, electricity for Ontarians,” said Peter Forrester, Electrical Trades Management Supervisor at R.H. Saunders GS. “It takes a tremendous amount of teamwork to safely plan, coordinate, and execute the major outage work.”

Project work continued to ramp up significantly as the station continues to prepare for a significant generator overhaul and runner replacement program that is now scheduled to begin in January, 2023 and will last well over a decade.  Many of the projects this year were completed in anticipation of this major overhaul program. The program is also part of OPG’s commitment to reinvest in its hydro fleet over the next twenty years and contributes to the company’s overall climate change goal of becoming a net-zero carbon emissions generator by 2040.

In 2022, OPG’s RH Saunders GS hired 10 permanent maintenance staff, and 22 additional long-term temporary trades staff to support ongoing projects and maintenance.  Some of these temporary staff are local, providing good jobs to residents of Cornwall. Some are from outside the area, who now rent, shop, and support the local economy in many ways. In total, over 80 full-time staff and around 100 contractors are working at the RH Saunders GS site.

OPG also opened the Saunders Hydro Dam Visitor Centre once again in June. Over 6,000 people visited the centre as tourists, event participants, schools, and community groups that book the centre for meeting space.

About the R.H. Saunders Generating Station

R.H. Saunders GS is the second largest hydroelectric generating station in Ontario with a 1,045-megawatt capacity (that’s enough to power about one million homes). Between three and five per cent of the provinces energy demand is produced in Cornwall. More info:

OPG was featured in the 2022 Year in Review report by Cornwall Economic Development.