Cornwall Ontario – Community and business leaders gathered together this weekend at the NAV CENTRE for the 31st Annual Business Excellence Awards put on by the Cornwall Chamber of Commerce. 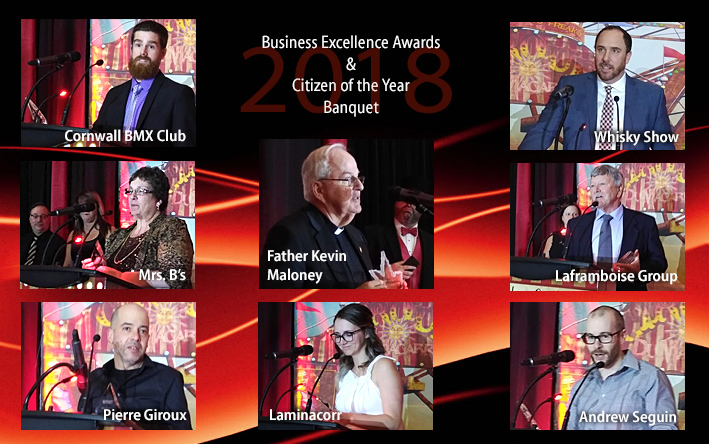 The Business Excellence Awards recognizes and celebrates companies who have distinguished themselves by fostering growth, innovation, community service and excellence in their sectors. The winners are chosen by a committee of peers who evaluate nominations received from the community.

Economic Impact of the Year

Plastics manufacturer Laminacorr was honoured with the Economic Impact of the Year award. The company completed a major expansion to their facility in the Cornwall Business Park, an investment of over $8 million that has resulted in new jobs.

Business of the Year

Laframboise Group was named Business of the Year. The metal fabrication company, led by Michael Laframboise, is in the midst of a major consolidation of its business on a 80 acre waterfront site in the west end of Cornwall.

Small Business of the Year

The Small Business of the Year award went to Mrs. B’s Gifts and Home Decor. Owner Barb Leduc and her staff are introducing shoppers from Ottawa and across the region to the eclectic shopping and dining scene in Cornwall..

Entrepreneur of the Year

Crush Lane was selected as the Entrepreneur of the Year. Tarah Zaczyk has steadily grown her jewellery business culminating in the opening of a permanent retail location on Pitt Street.

Maurice Emard was honoured with the Lifetime Business Achievement Award. The co-founder of Emard Bros. Lumber was  recognized for his long standing philanthropy in the community.

Young Professional of the Year

Ian Bentley and the Wonderful World of Whisky Show was recognized for creating a unique event that attracts whisky fans from across the world to Cornwall. This year’s show takes place March 21-23 at the NAV CENTRE.

The Cornwall BMX Club received the Breakthrough Award. The group of dedicated volunteers, led by Dan Drouin and TJ Shail, have created Ontario’s longest BMX track in Guindon Park, and in the process igniting interest in this popular sport. The Cornwall track will host USA and Canadian qualifying races this summer.

Team Cornwall Ambassador of the Year

Pierre Giroux was named Team Cornwall Ambassador of the Year. The renowned artist promotes Cornwall through striking paintings, many of which have formed the basis for the Historic Walking Tour.

Above and Beyond Award

The Above and Beyond Award was presented to the late Alaya Riley, whose courageous battle with cancer has inspired scores of people in Cornwall and beyond.

Father Kevin Maloney was named 2018 Citizen of the Year. A well-known and well-loved personality in Cornwall, Father Maloney has worked tirelessly to make a positive difference in lives of so many people in the community, particularly youth.