Cornwall Ontario – Community and business leaders gathered together this weekend at the Cornwall Civic Complex for the 32nd Annual Business Excellence Awards put on by the Cornwall Chamber of Commerce. 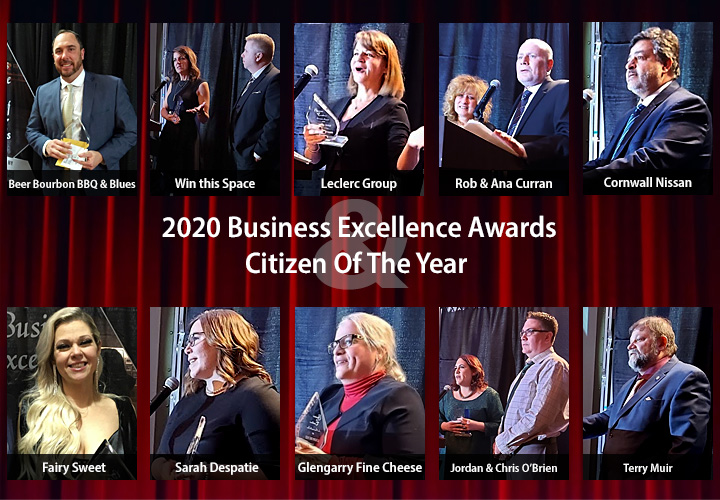 The Business Excellence Awards recognizes and celebrates companies who have distinguished themselves by fostering growth, innovation, community service and excellence in their sectors. The winners are chosen by a committee of peers who evaluate nominations received from the community.

“This year’s business winners are a reflection of the strength and diversity of the Cornwall business community,” said Shannon Lebrun, Chamber President.
Here the the 2019 winners:

Economic Impact of the Year

Food processor Leclerc Group was honoured with the Economic Impact of the Year award. The company established a state-of-the-art facility in the Cornwall Business Park, an investment of over $25 million.

Business of the Year

Cornwall Nissan was named Business of the Year. The long-standing car dealership moved to a brand new facility on Brookdale Avenue, bringing along its sister company Uptown Kia.

Small Business of the Year

The Small Business of the Year award went to Glengarry Fine Cheese. The award-winning cheesemaker is located just east of Cornwall in South Glengarry.

Entrepreneur of the Year

Fairy Sweet was selected as the Entrepreneur of the Year.  Sue-Anne Heitmann and Suzanne Martinin continue their sweet success story with the launch of a new Keto line of products.

Rob and Ana Curran were honoured with the Lifetime Business Achievement Award. The couple recently celebrated 30 years of owning and operating Riley’s European Bakery, a Cornwall institution that has been around since 1905.

Young Professional of the Year

Ian Bentley and his team were recognized for the ongoing success of the Beer Bourbon BBQ & Blues festival which attracts thousands to grounds of the NAV CENTRE each summer. This year’s show takes place July 11.

The Win this Space program received the Breakthrough Award. Win this Space was developed by the Cornwall Downtown Business Improvement Area (DBIA) to help entrepreneurs secure a home in the heart of the city.

Above and Beyond Award

The Above and Beyond Award was presented to Jordan and Chris O’Brien. The owners of Cornwall’s Freshco were recognized for their ongoing support of community initiatives.

Terry Muir was named 2019 Citizen of the Year. A well-known and tenacious volunteer in Cornwall, Mr. Muir has helped organized a number of positive community events, most notably Ribfest, which attracts thousands to Lamoureux Park each August.